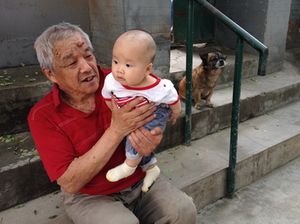 Old and new, with dog…

China is old and new.  The gal loves this photo, showing a senior citizen and his one grandson. He is lucky, the old man.  First, he has a boy in the generations below him.  Secondly, he can afford to keep a dog, which requires an annual licence of about $10.  A staggering 200 million Chinese are over 60 years old (14.8 percent of the population) and some of them seem to go on forever (the father of Wanda billionaire Wang Jianlin is a mere 103..) Nip out from luxury hotels to exercise in parks and along canals and rivers, and you see them everywhere, exercising. Along Shanghai’s Bund, they are, when the weather allows, flying elaborate kites in a distinctly competitive manner. 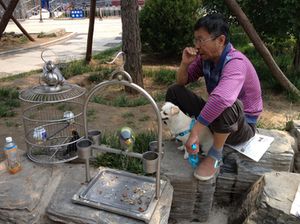 You also see them merely watching and listening to their beloved songbirds. These are carried, caged with fabric covers over the top.  Remove the cover and they sing for all they are worth.  Their owners watch them like teenagers glued to Justin Bieber but, unlike those fans, they, the owners, do not scream – and they invariably have a cigarette trailing from one hand.  This guy is multi-petted, with a bird in a cage, a parrot, and a dog.  (I am reminded of an obituary for the Countess of Arran, who died May 16th, 2013, aged 94. She and her husband slept with a badger and a fox on their bed, and their house, where humans wore wellington boots, was also home to alpacas, dogs, llamas, pot-bellied pigs and more – in between, in 1980 she reached 103 miles an hour to win the highest power-boating accolade on Lake Windermere in a boat that looked more like a rocket.) 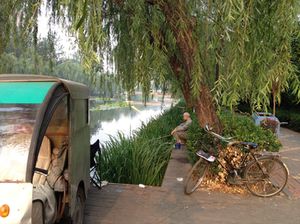 Back to Beijing.  My run along Liang Ma canal had been so special I wanted to see more of old Beijing. Four Seasons Chaoyang introduced me to Imperial Tours, started in 1999 by former London strategist Guy Rubin and his Korean art-historian wife Nancy Kim.  And they arranged a splendid tour with Leon Liao, one of their best guides.  Having already ‘done’ the brothel scene, I was really happy today to visit hutongs in area north of Behai Park (at eleven o’clock from the Forbidden City). Leon Liao was full of facts and figures.  The army is voluntary but many parents want their kid to sign up to give the discipline that single offspring often lack: also, after three years the government guarantees a job, often in security, which may well come with accommodation as well as good money. 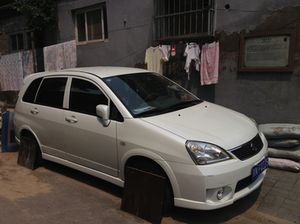 .. and car, protected against peeing dogs

As we walked, I was told that if someone is out of work at age 40, training is offered as well as a lump sum to start a business, and that can be repeated at 50. After that, it is pension time, women at 55, men at 60, and it is about $400 a month. We pass a parked car with a board up against its wheels.  Why?  To stop dogs doing their thing, which dogs in China have in common with their fellows world-wide, though I cannot imagine Pekingese misbehaving.  Also known as lion dogs and pelchie dogs, they did originate in China – they were favoured by the Imperial Court as lap dogs and companion dogs (wonder if their owners had them in their beds?). 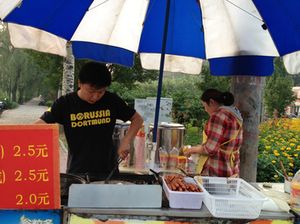 A snack from a football lover

Leon says most of the people he takes on tours are interested in shopping, but there is no time for that today – and anyway the trusted Porsche Rimowa wheelie is already crammed full, unable to take anything more.  We are near the former palace of Prince Gong of the First Rank (Alsin-Gloro Yixin 1833-1898), but we leave that for another time.  We stride along Yandai Byway, colloquially known as smoke-pipe hutong, because it is the shape of an old-fashioned pipe. There are souvenir shops and ice cream shops galore, interspersed with ten-foot high grey walls indicating that that house behind was ‘grace-and-favour’, given to a retired general. 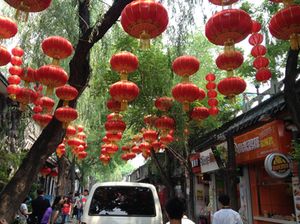 Red lanterns in a hutong

The final impression, of red lanterns down one side street, was a suitable memory for my last but one day in China, on this visit that is.  Back at Four Seasons Chaoyang, a hotel that has so quickly shown Beijing the luxury associated with this brand, I pack the Rimowa (all of five minutes) and head away.  The car, of course, has WiFi in it – as do all worthwhile hotel cars in China, at least in Beijing and Shanghai, these days.