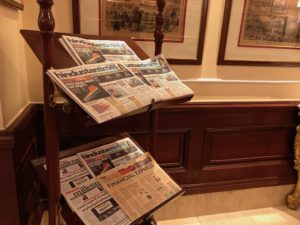 Education is very much part of the DNA of Delhi’s pre-eminent independent luxury hotel, The Imperial. It is a striking white building, inside and out, with the square lines and airy feel so typical of Sir Edwin Lutyens, the architect who, with Sir Herbert Baker, designed New Delhi in the 1920s and 30s. The interior walls are an art gallery displaying some of the over-7,000 unique pieces of Anglo-Indian art, many of them landscapes done by wives of British officials and army officers when they were spending the hot summers up in the mountains. Yes, the gal knows this is India from the moment of arrival on – see above. 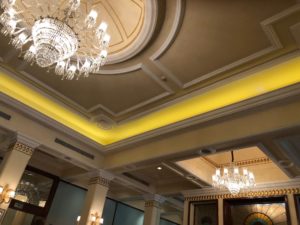 The hotel’s 1911 restaurant is named for the year that the capital of India was moved from Calcutta (Kolkata) to Delhi, the ‘centre of the country’ – although neither London nor Washington DC is central. At the entrance to this all-day restaurant is a rack with just a few of the day’s newspapers. India has the second-largest distribution of daily papers anywhere, with over 100 million copies sold every day: the challenge is that all are quite difficult for foreigners to read.   1911 has painted walls, showing old Indian landscapes, reaching up to the high ceiling, and a Steinway grand piano, usually covered with a velvet cloth, is played in the evenings: a terrace overlooks the garden’s lawns. 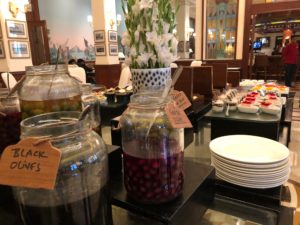 Marinated olives on the lunch buffet

I love the lunch buffet (see the video below). New, says the chef, are his array of pickled olives. I go for salads, with baby asparagus and lots of beetroot. There is a healthy corner, as befits a hotel run by an ultra-keen cricketer, Vijay Wanchoo, who plays in his hotel’s team. I hear how luxury is being enhanced the whole time, here: more rooms now have heating, sometimes necessary in winter, and everyone has free WiFi for up to three devices – as a result of putting in this added benefit, customer ‘complaints’ have dropped by 99%. As an independent, Vijay Wanchoo knows he always has to be slightly ahead of what his customers want. 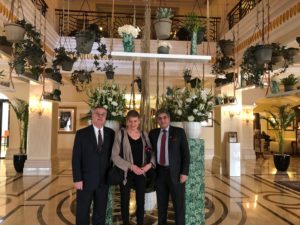 His other restaurants often have visiting guest chefs – right now, the Italian-themed San Gimignano is hosting a team from Belmond Villa San Michele, in Fiesole, outside Florence (they are here through February 11th, 2018). Another educational aspect at this luxury hotel, by the way, is its partnership with Harvard. Visiting professors work in the adjacent ten-room Business Centre, run by former US military guy Charles Korth, and Indians applying to the University can be interviewed here, and interact with each other, and the visiting Americans. Yes, say Vijay Wanchoo and Charles Korth, this is big business. On the tourist side, more and more visitors come through the Preferred network, and it is useful, too, to be the only hotel in the whole of Delhi that is included in Conde Nast Traveler’s Gold List of best hotels worldwide, 2018. NOW SEE A VIDEO OF THE 1911 LUNCH BUFFET, BELOW