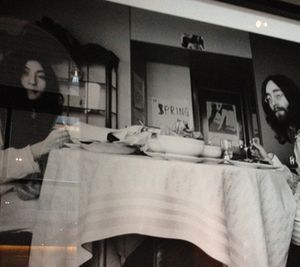 John Lennon and Yoko Ono were really busy in 1969.  They stayed in room 902 of the Amsterdam Hilton, March 25-31, 1969, says the gal, and then May 26 to June 2nd, 1969 they were in 1742 at Fairmont Le Reine Elizabeth, Montreal, when they recorded Give Peace A Chance – an unknown admirer leaves 12 red and 12 white roses outside its door every December 8th, the anniversary of John Lennon’s murder in 1980.  This photo, by Claude Vanheye, is in the gallery of celebs on the main floor of the luxury Conservatorium hotel, Amsterdam, near to one of a bushy-haired Michael Jackson (and no he is not, as he did years later at the Adlon Kempinski, Berlin, dangling a baby out of a window). 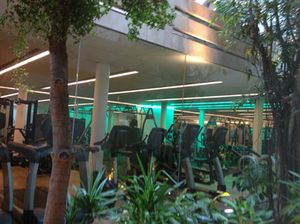 Looking through to the sky-lit gym

The Conservatorium , which opened early 2012, attracts today’s celebs, of the calibre of Justin Bieber, Lady Gaga, Madonna and Katy Perry.  I bet they love the full-size subterranean pool, with a big living wall at one end. And the gym, also below ground but lit from a tall vertical vent, is surely the best in town. It has over 200 local members, some of whom bring their own personal trainers with them. The Akasha spa also attracts those members, who get three treatments a year for their membership.  The spa has just switched products, to a local Ooolaboo brand, but interestingly up above ground, in the very superior arcade of designer shops, right inside the brick hotel, is a SKINS boutique – yes, the same company that does the fabulous spa at Hotel De L’Europe but this boutique is an emporium of dozens of niche beauty products. 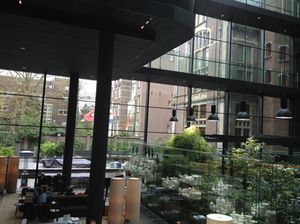 The hotel is packed with locals, and others attracted to bars and restaurants that are handy for the trio of museums just opposite, the Rijksmuseum, the Van Gogh Museum and the just-reopened Stedelijk Museum. The trio has more visitors than eating places so the sensible book ahead for a table here at the Conservatorium.  Coming into this hotel is breath-taking.  The old L-shaped 1901 Rijkspostspaarbank Building, which later became a music conservatory, has been brought to 2014 vintage by enclosing  the former courtyard in one big glass box (yes, it is even bigger than the glass box Qube restaurant at The Leela Palace, Delhi). This makes a unique reception and welcome area, as you look out at adjacent residential and other buildings, and Piero Lissoni, architect and designer, has included lots of living walls, and displays of, well, old aluminium jugs here, and china pots there. 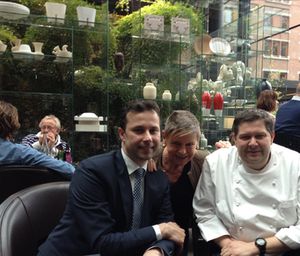 Schilo van Coevorden, whom I had last seen when he was cooking at Finca Cortesin, the luxury resort on the Costa del Sol, is now here full time. He came over as Roy Tomassen, a Dutchman who was enticed from The Grove to run this hotel. In the lovely all-day Brasserie, I chose to make a plate from the outstanding bijou Ice Table buffet: Schilo’s menu here also offers a daily special, say steak tartare with chips on Saturdays, and a Sunday roast. We went trough to his Tunes fine dining restaurant (Tunes, for Conservatorium…) and we talked gins.  Yes, Silvius is the hottest craze of his 40-plus selection but, he said, look out for Bobbis.  I never know what I am going to find, and learn, in my world of luxury hotels!