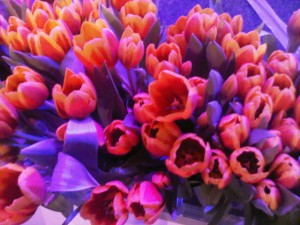 What unique destination could this possibly be but – Amsterdam.  Just as proverbial hills are alive with the sound of music, so Amsterdam is alive with bikes and barges, outside and, even at this time of year, tulips within.

The stage of the gorgeous ballroom of Hotel Okura Amsterdam is brilliant with thousands of tulips, all around its edge and on the podium.

The setting is the annual convention of The Leading Hotels of the World, which has well over 400 tip-top luxury hotels around the globe. 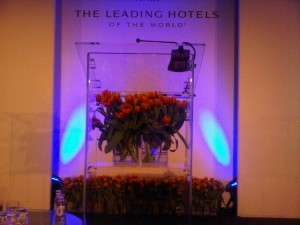 The stage is literally set - beautifully

Here are gathered some owners, and hundreds of top management, all in their best Hermès and Tod’s and networking like fury.

The first night there was a fabulous cocktail party at Hotel de l’Europe, owned by the Heineken family. Hotel GM Tom Krooswijk literally rolled out the red carpet, all the way down the street outside.

Inside it was Laurent-Perrier Champagne all the way.  In one of the many chandeliered rooms painters were finishing a ‘Van Gogh’, a nice touch. 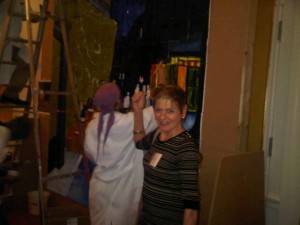 In front of a 'Van Gogh' in progress

Ran into my dear friend Drew Nieporent, had not seen him for over ten years… he started and still heads the New York-based Myriad Group, which includes four Nobu restaurants and half a dozen other top eating places in the Big Apple.

But it is also hard work.  Sessions started the following morning at 0815, play hard but work hard too and guess what, the gal was not the only delegate in the gym when it opened at 0630 (and then she had breakfast with another long-time friend, Raymond Bickson, whom she had seen recently but their last breakfast, in Hong Kong, saw him eating only two yoghurt pots whereas today he had a bowl of yoghurt with strawberries plus a bowl of porridge). 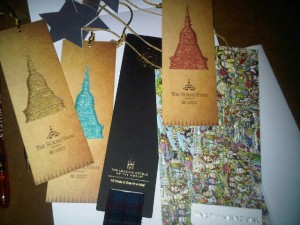 Winners in the bookmark competition

Snuck into sessions that morning were the awards for best bookmark idea for The Leading Hotels of the World directory.  Forty hotels sent in ideas, which were judged by Leading’s head office staff.

Top prize went to The Sukhothai, Bangkok, for hand-made silk bookmarks.  Runner up was The Gleneagles Hotel, Scotland, for a deep blue leather bookmark with a hanging tartan ‘flash’ copied from the flash on the garters that keep men’s long socks up when they wear the kilt. Third prize-winner was Le Martinez, Cannes, for collages of entertainment glitterati and hanging silver stars, a reminder of the annual Cannes Film Festival.