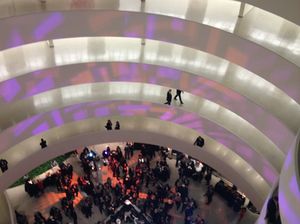 From the top of the Guggenheim’s spiral

The Guggenheim as it is today is mostly Frank Lloyd Wright, although it opened October 21st, 1959, a few months after his death, and ten years after that of Solomon Guggenheim, whose inspiration it was (he lived for a long time, incidentally, at The Plaza Hotel). The atrium rises up like a giant hollow snail shell.  Wander up when it is full of people and the view back down is breathtaking.  Tonight the crowd down there comprises over 400 top luxury hotel owners and managers from around the world, saying hello to each other over glasses of Laurent-Perrier Grand Siècle.  They, and the gal, are in New York for the annual Leading Hotels of the World convention. 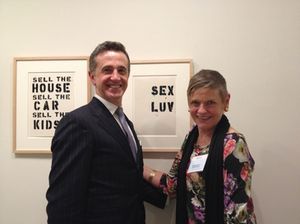 The spiral is today showing works by Christopher Wool, an American artist who apparently has forced an ‘agile, highly focussed practice’.  Really?  Oh well, Valeriano Antonioli, CEO of Lungarno Collection, and I use a couple of pieces as a backcloth.  There are hoteliers here from everywhere, even Pakistan (Michel Galopin, GM of the Islamabad Serena). I meet up with the just-appointed GM of Acqualina Resort & Spa on the Beach, in Sunny Isles Beach, Tamir Kobrin, whom I last saw in Delhi.  The hotel world is a small one, and a really friendly one. It is, of course, also a business. The main sessions of the three-day conference were held at The Pierre New York – a Taj Hotel. The ballroom, which can seat 600 for weddings (of which they do a lot – they even have one this New Year), was transformed into a very elegant meeting space. 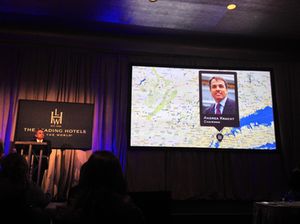 The proceedings were opened by Leading’s Chairman, Andrea Kracht, owner of the Baur au Lac, Zurich (his wife Gigi Kracht is on the board of the Guggenheim, hence having the cocktail there, hosted by the Guggenheim’s gracious director, Richard Armstrong, who has just returned from talking about the forthcoming Guggenheim in Abu Dhabi). Of course there were marketing speakers, notably a brilliant Columbia professor, Rita Gunther McGrath, who pointed out that as in any industry, competition is not necessarily in your own industry.  It has been shown in the USA, for instance, that increased spend on latest technology has diverted discretionary spend from fashion and, worryingly, travel. Individuals are moving from stable career paths to a series of gigs through life, and from infrequent job hunting to permanent career campaigns managed not by organisations but by individuals.  It is essential to realise that all your assumptions will be challenged. 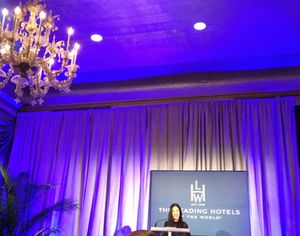 Another good speaker was Vera Wang, enticed by her long-time friend Grace Leo, who is on the board of Leading. Vera Wang pointed out that her main challenge in running and expanding her global fashion empire is actually people, finding them and retaining them. Her clients want to be seduced with glamour, with an allure of entertainment. Her wedding dresses translate dreams. What does she want from a hotel?  Simple telephone systems, more mirrors and faster room service delivery.  Would she ever do her own hotels?  After wavering and talking around the question without directly answering, she said it would have to boost her existing brand.   Of course there were some easily-forgotten speakers, like two McKinsey males who gave a polished production, promoting sharing data on consumer traits – this was shot down with one verbal arrow from Gordon Campbell Gray, who said his clients, at Le Gray in Beirut, want privacy. 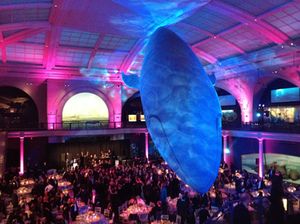 And then came the final gala, an amazing event at the American National History Museum up on the West Side, at 77th Street. Then-President of the USA Ulysses S Grant laid its cornerstone, in 1874.  How amazed he would be to see how psychedelic lighting turns its rooms into a Disney-type arena.  The Pommery Cuvée Louise flowed, the jazz-bop music and singing blared (fine unless, as I was, you were seated at front tables right in front of LOUDspeakers). Michael Frenzel, GM of The Palace Hotel, Berlin, won a Blancpain watch for being top-ranked hotel by Leaders Club members, and Giampaolo Otazzi, GM of Hotel Cipriani, Venice, won a watch for achieving top marks in LQA quality assessment.  The much-loved Joe Giacoponello was deemed living legend. 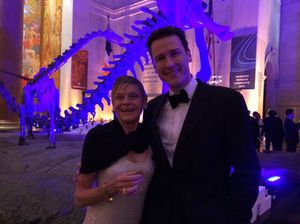 Afterwards, at least 200 went back to The Pierre for the luxury hotel’s after party, which went on until 2.30am – there were hot dogs for those who were still hungry.  This time next year, Leading will be meeting again, in Vienna (no, said Elisabeth Gürtler, the final gala will NOT be in The Spanish Riding School, that will be too cold).