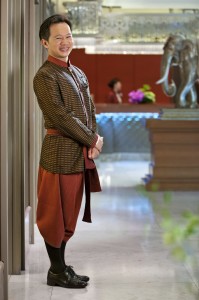 Anusorn Tiamsittaraksa is the elevator wizard at Mandarin Oriental Bangkok

For the luxury traveller, individuals make an experience. Those who braved England’s creaking public transport system to get across London to the Olympics have been raving about the kindness of the military doing security checks – the army, navy and air force were called in after the disgraceful inability of G4S to recruit enough personnel, even though G4S’ CEO Nick Buckles had, falsely, said there was no problem.

The gal thinks of the Judys, club lounge managers at Four Seasons Sydney, Judy Larucci, and Shangri-La Pudong Shanghai, Judy Leung. They both welcome guests back as sincere friends.  Many also rave about Anusorn Tiamsittaraksa at Mandarin Oriental Bangkok.  He is elevator manager.

A Puck-like figure, he bows deeply as you approach, and one hand extends, like a cobra out of a basket, to wrap around inside the elevator and, sight unseen to do the apparently physically impossible, as he pushes your floor button without being told. 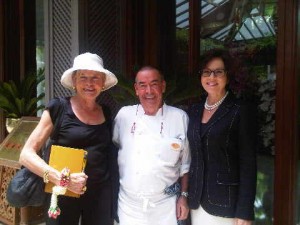 Mind you there are many touch points at this venerable hotel.  It is remarkable to find both the General Manager, here all of four weeks, and the top chef, here for decades, waiting outside the front door to welcome this arrival.

When I first knew Khun Bart, as chef Norbert Kostner is often called, he wore a tall white cloche over his hair.  Now, hatless, he has no hair, but he sports bright scarlet glasses – around his neck (they are the type that join magnetically at the nose, and when they are not being used they hang as a necklace). 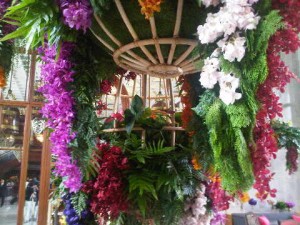 Sensational flowers are masterminded by a former engineer

But the main overall impression of the iconic luxury hotel has to be flowers.  Everything else, the location right on the Chao Phraya river, the history of the building, the writers’ areas, the gardens, the superb staff, all that is well known, and expected. 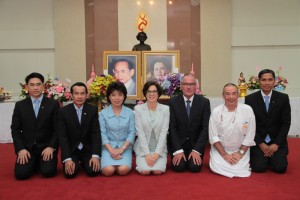 The GM and her Chef join colleagues honouring Her Majesty's birthday

What is so truly wow are the floribunda, the colourful arrays that seem like all the Chelsea Flower Shows of the last decade rolled into one. These flower displays are masterminded by the royal florist, Sakul Intakul, a former engineer (this is a very ‘royal’ hotel: senior management went to The Palace, today, to honour Her Majesty’s  birthday on August 12th, 2012). There are orchids but there are more, a palette of every colour imaginable, like a stack of scarves in a Shanghai Tang store, or of silk bolts here in Bangkok in a Jim Thompson shop. Ah, that is a name that is part of the city’s exotic legend, but there are others.  One of the 396 rooms here is the Captain Andersen Suite, number 1212, named for the Dane who bought the old Oriental Hotel in 1887 and rebuilt it (he also founded the East Asiatic Company). There is a Gore Vidal Suite (the first time he stayed, he asked a foreign staff member which way his river flowed). 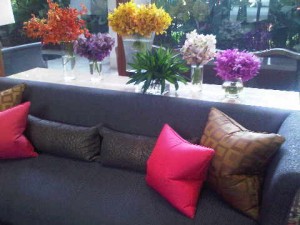 .. and yet more, with, of course, Thai silk cushions.

In room 1412, the Graham Greene Suite, a framed sepia-hued paper is emblazoned with a note on an old-fashioned typewriter, the kind where some letters punch harder than others.  The author had written: I have very happy memories from nearly 30 years ago .. I hope that .. it remains a hotel where almost anything may happen’.

Twenty-one of his books, clearly numbered in the Heinemann and Bodley Head collection, are on the same shelf, and a whole cut watermelon welcomes the lucky inhabitant of this temporary home. 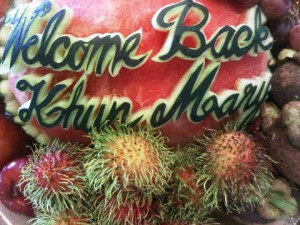 As a change, fruits, including a personalised watermelon, decorated room 1412

There are flowers galore in 1412 – and a personalised watermelon –  and along the celadon-hued corridor back to the elevator.  Just as Khun Anusorm works his Puck-like magic downstairs, up on the 14th floor, soon as you leave your bedroom a butler appears by magic by the elevators, to call them. Perhaps this magic is helped by an electric censor on the door? 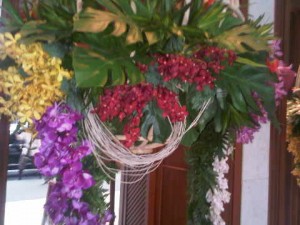 Going to the spa, or gym, is rather magical too.  You need to take the five-minute shuttle boat across to the other bank of the river.  In the gym (no flowers!) the attendants wai I welcome and call you by name.

How do they know, at your first visit?  On arrival at the teak-lined spa (white orchids) there is more wai-ing, and healthy tea, and the spa journey, done by time, is yet another Mandarin Oriental experience. 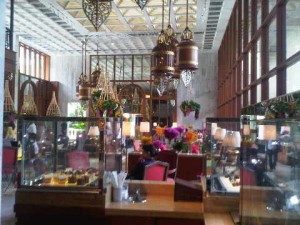 The lobby has a discreet boutique, foreground, selling home-made macaroons

Back via the shuttle, you find yourself in the lush gardens (greenery rather than flowers) that, maze-like, lead you to quiet sitting areas for contemplation, or to the peace of a long rectangular, stepped-depth pool, or to the more-active main pool, its shape an octagon that has been pulled, stretched as if making pizza dough.

By the way you can get any kind of food you want here, Chinese, French at the 1958-vintage rooftop Normandie, Italian, seafood (1972-vintage Lord Jim’s) and, of course Thai.  The lobby even has a corner boutique selling one-bite cakes, and some of the 8,000 macaroons that Khun Bart’s team make every month. 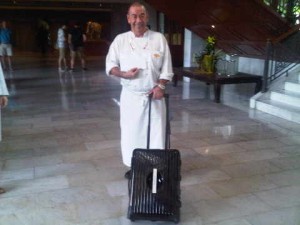 Khun Bart has had a busy time today, already.  He was party-catering a party given by Thailand’s best-known energy drinks owner until the small hours. Tonight he cooks for a wedding for 900.

And yet, in between, miraculously he appears as a guest leaves, and insists on personally escorting the wheelie bag out to the waiting car.  Remember, this is not a but THE luxury hotel where anything may happen…