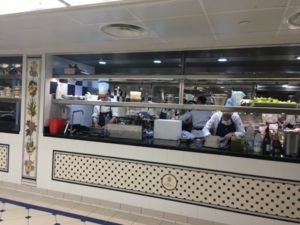 Gennaro Russo, from Positano’s Le Sirenuse Hotel, is showcased at the luxury Ritz Paris January 15-28, 2018 (Russo, 31, is Executive Chef of Le Sirenuse’s La Sponda restaurant). “One day in 2012 I found myself in front of the Ritz Paris when it had just closed for renovation”, Russo recalls. “I stood there gazing at that façade covered in scaffolding and I remember imagining how it would be just to go inside the lobby when it reopened. The idea that I might enter as a chef never even crossed my mind. I can still hardly believe I will be able to show that simple southern Italian food can achieve the highest levels of culinary excellence.”  He will also lead a cooking class on January 23rd, 2018.