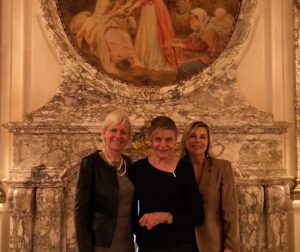 Arriving at one of The Dorchester Collection’s always-memorable luxury hotels, Le Meurice, Paris, the gal was thrilled to meet up with another of the talented women in the company – yes, its Bel-Air property in Los Angeles and Coworth Park, a stone’s throw from Windsor Castle, both have chatelaines, in the true sense of the word. And here Franka Holtmann has been in charge for the last 11 years. We are standing here, in front of a video ‘roaring fire’, with Isabelle Maurin, who, for this as well as sibling hotel Plaza-Athenée Paris, is in the tradition of the legendary inhouse ‘PR people’ who truly understood the wider world. 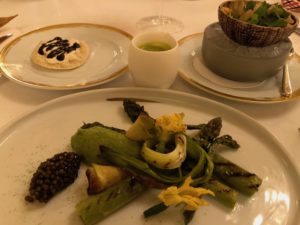 Franka Holtmann had another commitment so over new-look Ducasse dishes Isabelle Maurin and I did truly attempt to put the world to rights. Restaurant le Meurice Alain Ducasse is about healthy living, as evidenced by his dishes – one of his three amuses, for instance, was a small crockpot, to share, holding, well, simple steamed vegetables, kept hot on stones in the pot. Take a vegetable out, with chopsticks, dip it in a tapenade. The menu is a simple card, thick texture, gold and black printing, offering four starters, four mains, cheese and five desserts. Always Asparagus could be my second name: here, Piolenc asparagus, on to which caviar was spooned, came with a separate bowl of sea-urchin. 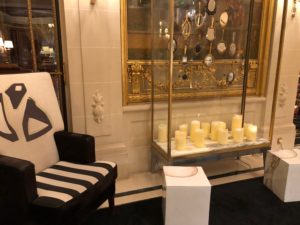 Among the many outstanding things about this restaurant are the off-white Eero Saarinen tulip chairs that allow you to swivel – another is the simplicity of the ambience, with the glorious rococo of a room little changed from the 1835 establishment opened by Louis-Augustin Meurice, whose father Charles-Augustin ran a carriage service to England. Modernization is limited to the virtual fire, simple white table linens and four outsize chandeliers, each with 24 lamps with parchment frames. Modernization is, however, found in an adjoining room, where Philippe Starck’s ceiling is decided outré. The main lobby includes a seven-foot high standing sand pit, to make a hand impression – nearby are a couple of modern stools and a display of pens. 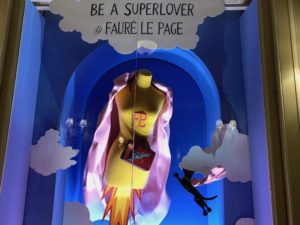 I had earlier shown ignorance by trying to find the hotel’s old entrance on rue de Mont Thabor, parallel to rue de Rivoli. Well, at some point in the last few years the main door has moved, to rue de Rivoli (my lovely suite, 102, looked right down at the street and across it to the Tuileries, see a video below). A vitrine near Mont Thabor is for cult boutique Fauré Le Page, which started out as weapons supplier, handing out to disruptors in 1789 and 1830. As I was later playing Sudoku on a Technogym runner, I thought about other outstanding features of this luxury hotel. Breakfast is one of the best à la carte experiences anywhere, from Bordier butter and yoghurt through to Ferber preserves, sensational wholewheat rolls and outstanding coffee. Allied to this is the passion of the servers, the young Frenchman who said next time I must try the vanilla yoghurt, and the sense of humour of last night’s maitre d’ who was almost dancing on ice as he kept the room playing as a fine orchestra. When I finally left, and said to the doorman ‘see you next time’ he laughed and said ‘next week, I hope’. NOW SEE VIDEOS OF SUITE 102, AND THE SPLENDID BREAKFAST