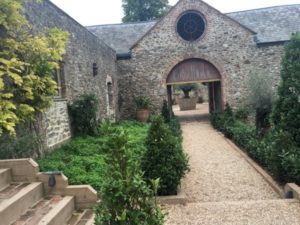 Via part of the vegetable garden to the stable block

Well, it is not only the gal who is enamoured by PIG hotels. The fifth, The PIG at Combe, near Honiton, Devon, opened July 11th, 2016, and after less than three months it is full every weekend (and for six months ahead) and nearly full every other day, too. Within two weeks of opening, the 33-room hotel was completely booked out for Christmas and New Year. Oh what a success story this new-type luxury hotel is. Partly it is the location, with 3,500 acres of rolling pasture and woodland, and not another building in sight – see the video below, for a panorama that includes some of the dozens of cattle, but not the Arabian stud that is also housed here. Partly it is the historic house, the main stone building hosting gorgeous climbing greenery right up to its third-floor roof. Some of the bedrooms, by the way, are in the old stable block, reached via some of the meticulous working gardens. 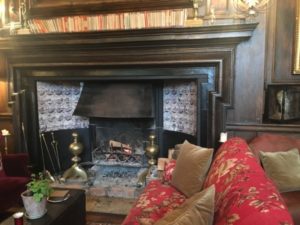 The former lobby is now a bar, lounge area and library (books on mantel shelf)

I was in Hay Loft, upstairs in one of the stable block rooms. Up 16 stairs I went, to a big room,about squash court-sized with open wood rafters overhead. As always in a PIG, some of the walls are distressed, recycled timber. This is chic luxury, with seagrass floor and Indian rugs, some old-brick walls, a freestanding tub in the main room, a gigantic shower stall with two-foot diameter brass shower head, organic Bramley toiletries, a retro Roberts radio and modern Samsung television, simple bakelite light switches and black telephone. My pantry area had a Smeg fridge, KitchenAid kettle and espresso machine, and a bottle of own-label Pig Hut wine, by M. Chapoutier. But, like many, I did not want to spend too much time in the room. Down in the main building, the former hallway is now, despite its high ceiling, a stunning snug-bar, with must-throw-yourself-down-into comfy seats (the most popular are near the big log fire, above which an array of highly-readable paperbacks is set). Opposite the fire is the main bar, with several English bubblies, including the house sparkling, Hambledon Classic Cuvée, in a big ice bucket. 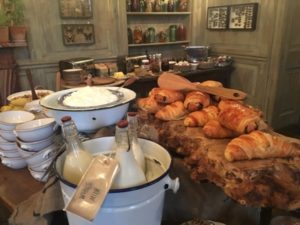 Part of the copious breakfast buffet

The former kitchen is now a private dining room. The former dining room is now two other lounges. This is a hotel with masses of places simply to sit (and remember all those acres to explore outside, and three walled gardens to inspect, and two Potting Shed spa rooms waiting, for pampering). One-time sitting rooms have been knocked together to form the new dining room, which seats up to 80 and is, like the bedrooms, nearly fully booked, doing up to 120 some weekend meals. I ate magnificently. As always at a PIG, the tables, on recycled wood flooring, and cutlery are mix-match, as if from car boot sales. And of course chef Dan Gavrilidis’s food, 80% of which is from within a 25-mile radius, is superb. To go with the house Pig Hut Syrah 2015, I started with crispy pig ear with brown borlotti beans, went on to Cannaframe Farm braised shin of beef with wilted baby gem and peas. It was the same new-gourmet experience at breakfast. Many, says server Michelle, choose the Full Pig Out, a traditional English but more (see the photo above, showing its middle-cut bacon, two eggs any way, sausage, black and white puddings, tomatoes, and Portobello mushroom). 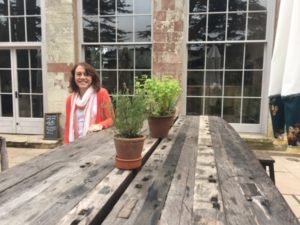 Fiona Moores in front of the Folly

Cleverly, at breakfast you can do the £10 buffet, where every taste is genuinely sensational and you can boil your own blue, brown or white eggs, or add £5 for a big-main, or simply choose the £8 alternative, say Scott’s porridge, or Heinz baked beans on toast, all with juice, hot beverage and served pastries. This whole place is wonderful, and value. In under three months, it was deemed, last Saturday (September 17th, 2016) the Daily Telegraph’s fourth best country house hotel in the whole of the UK: numbers one to three came in at starting prices of £260, £315 and £535, nightly for double occupancy, breakfast extra, whereas this super new-style luxury hotel starts at a mere £145. And the people running it, including GM Fiona Moores, are fun, into the bargain. No wonder locals love it, too – they flock to the one-time Folly, 100 yards from the main house, which has been turned into a day-long coffee bar which also serves pizzas and snacks (with so many village pubs now closed, this is the kind of place that is a magnet for community networking).  NOW WATCH A VIDEO OF THE VIEW, 360-DEGREES, FROM THE FRONT OF THE PIG AT COMBE