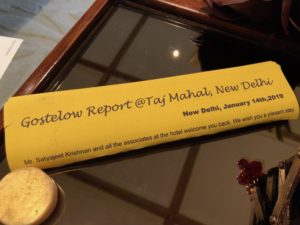 What a personal welcome!

Well well well, how about THIS for a welcome? There, among flowers and certain edibles, was a roll as if from a certain monthly market intelligence newsletter, a missive that many say keeps them abreast of what is going on in the luxury hotel world, worldwide.  The gal has come to Taj Mahal Hotel New Delhi to see what IS happening. Known as Taj Mansingh because of its locale, the big news is that this iconic hotel is continuing in the hands of Taj, thanks to the sensible decision of the building’s owner, the New Delhi Municipal Council NDMC.  Well, who would want to change such a good operation?  This is, after all, showcasing India, its hospitality and its arts, as shown above. 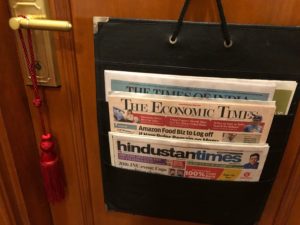 Newspapers outside the door (note the red Do Not Disturb cord)

This 296-room hotel somehow seems to know, for instance, which newspapers are preferred by its guests, of whom 80% are on business and obviously need to keep up to date.  Apparently India has over 100,000 registered newspaper titles, of which the best-selling is the Hindi daily, Amar Ujala, with a circulation of three million. The good people of Taj Mahal New Delhi, however, restrict your selection to ones that you might actually read – note how your papers hang outside the door, in my case the super Versailles Suite (with Versace china), and note the stylish Do Not Disturb cord, which has an accompanying green Please Make Up cord. Go into your room, and your desk holds a letter from GM Satyajeet Krishnan outlining the hotel’s very commendable sustainability policies, and do you, the guest, have any ideas? 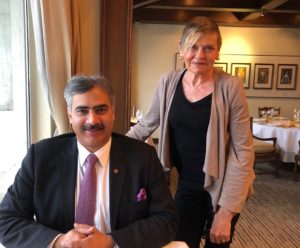 Yes, India is full of surprises.  Europe seems to think it has invented Private Members’ Clubs, with accommodation attached – Soho House started in London in 1995.  But in fact hotels in India have often had Private Members’ Clubs from way-back.  Taj calls its PMCs ‘Chambers’, and the Taj Mansingh club has over 2,000 members.  People belong to network in a discreet environment with efficient services.  I breakfasted here, at Chambers, with Satyajeet Krishnan, who runs the hotel as well as heading Taj for northern India. It was the very day that he had been lauded in one of those multitude of newspapers, The Hindustan Times, as one of the world’s great hoteliers, alongside Minor Group’s Bill Heinecke, and legendary long-time boss of The Oriental Bangkok, Kurt Wachtveitl. 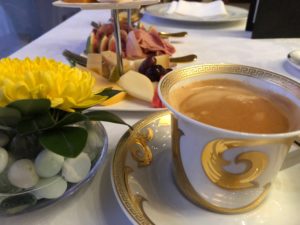 Typically modest, Satyajeet Krishnan in turn applauds his team. This is a luxury hotel that is always trying to do more with less. Increased efficiency, he believes, comes partly from empowerment. Various levels of housekeeping checks have been removed so now those who turn round rooms are more responsible for making sure they do it right, first time.  If what they do is noted, and if anyone is mentioned by name by guests, points are accrued.  Those with the most points are invited to the annual two-day associates’ honour session that Taj holds in Mumbai; this includes lunch with the management company’s boss, Puneet Chhatwal. NOW SEE THE HOTEL’S OWN VIDEO