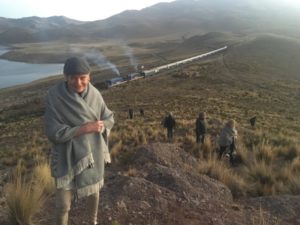 Another pre-dawn hike, train in background

The third day aboard this luxury-hotel-on-wheels, Peru’s Belmond Andean Explorer, began with another pre-dawn start – the train had parked overnight at Saracocha, in Puno region, apparently miles from anywhere but, according to onboard guide and sage Alvaro Zamara, between two spectacular lakes. Those who wanted to see the sunrise, a motley collection dressed in bobble hats, thick parkas and blanket wraps, gathered silently at 5.20 a.m. to be led up a nearby hill. Dawn revealed two stunning, isolated lakes. The gal was helped by down the hill by one of the train’s Securitas guards (one was on the rear observation car platform 24/7, by the way, and there was extra security in the form of a car that trailed us over the entire three days). To thaw out, coffee and breakfast called, and this morning the warm viennoise basket had a choice of Danish, chocolate or raisin. Then there was time to do justice to the cabin. Traditional brass fittings, things like overhead racks and filigree work, remain, but it was a stroke of genius to commission South African Inge Moore to update the interiors. 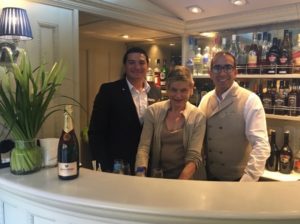 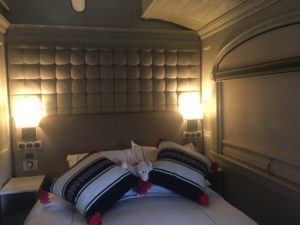 This cabin somehow had a llama hot water bottle cover

All cabins have enormous caverns under the bed easily big enough to hold two US-size Rimowas or other cases each. Beds come with soft Plumas Peruvian sheets and towels with the chakana, Inca cross, logo, and there are robes and slippers: used linens are returned, at the end of a double trip, to Belmond Monasterio in Cusco. There are safes. Shower water was instantly hot, almost boiling. Yes, it has been meticulously planned, and big congratulations to Belmond’s Man In Peru, Laurent Carrasset, and to Belmond for investing in all this – and congratulations, too, to Lorenzo Sousa, the other investor in Peru Rail, operator of this train. Now it is just essential that the word gets out: this particular train journey, Cusco to Arequipa, is something that all luxury world travellers should experience, the kind of thing that separates getting into Machu Picchu before the hordes arrive, or going first into Hall 3 of the Terracotta Warriors in Xi’an rather than Hall 1, like the crowds, or missing the thousands of superficial tourists at Angkor by knowing what to do when. 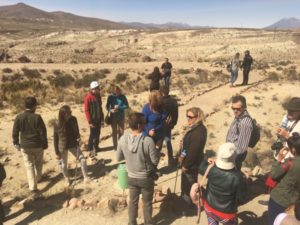 Off we all go again…

This is what Belmond Andean Explorer achieves, namely seeing parts of Peru that others do not reach. You also meet fabulous people of similar interests, and do a variety of activities, which in our case included a riotous pre-dinner game of charades initiated by a teaching-English-as-a-second-language teacher with purple streaks in her golden locks. Among those taking part with great gusto were a French quartet, a Brazilian sports manager who loves The Dorchester when in London and a Mexican 20-ish who filled me in on hostel etiquette and sharing rooms with complete strangers as he backpacked round South East Asia, alone – everyone, by the way, was well-travelled but hungry for more. This last included memorable activities. The final trek on this train was a good hike down to a small Sumbay cave with hundreds of 6,000-year old animal carvings. By now we were a communal band and there was laughter that one trekker was quite unsuitably dressed because of travelling handbaggage-only on her way to luxury hotels and Virtuoso in Las Vegas. Back up at the train, moist towels and glasses of just-poured iced tea were offered. It struck me once again that luxury is full of details – now, the tables are set for the journey’s Last Lunch and the linen napkins are, for the first time, folded not as pyramids but as waves. THE FINAL VIDEO, SHOWING THE TRAIN