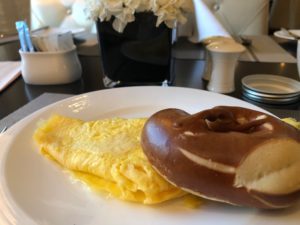 When Kempinski Hotel Beijing Lufthansa Center opened on October 9th, 1992, it showed what multi-use could be about. The gigantic complex includes offices and residences, and a mammoth gym, and a big hotel that stressed its German-ness (look at its name, ‘Lufthansa Center’).  The gal remembers going to the hotel in its early days and being in awe of its airport terminal-like lobby, its curved roof soaring overhead as you walked what seemed like 200 yards to the elevators at the far end. Now, says the gal,  the lobby of has been softened, with central carpeting and large flowers, and pop-up art exhibitions. 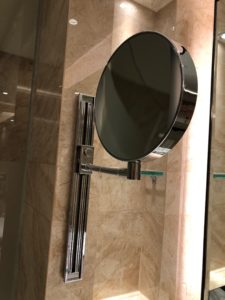 Clever – mirror on a vertical shaft

It is truly international, with a German touch – was able to put a pretzel-shaped Laugenbroten with an omelette. And, bliss oh bliss, soon all 540 rooms and suites will have been refurbished.  I was lucky enough to be in suite 1515, a harmony of palest blue-grey with hints of maroon – see a video below – although the Shanghai Tang toiletries add a riot of other colours. The space is really practical and, surely a first, the bathroom’s Emco magnifying mirror is on a vertical shaft so it can be used by an NBA player as well as what the fashion industry calls a ‘petite’.  Other pluses about this room include opening windows, and a view down over the hotel’s own garden to the Liangma River. Anything on this floor also gives easiest access to the absolutely new 15th floor club lounge. The lounge is so right for today. 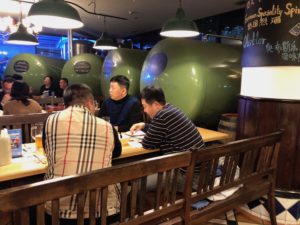 Still overseen by the ever-helpful Tony Liu, it is now an end space that wraps around three sides of a central service pod, which allows breakfast and cocktail service to be presented on buffets going 270° around. This will definitely increase use of the club.  And now, with just-arrived GM Brice Pean, there were little elements of surprise continually throughout my stay – I loved reading a small paperback that arrived, 101 Stories for Foreigners to understand Chinese people, by Yi S Ellis with her husband Bryan D Ellis.  Sometimes, admittedly, I find it a little taxing to understand these fascinating people, but I am learning.  Their fascination with brands shows up at all times, even in a visit to Paulaner.  AH, the hotel’s brewhouse.  What a success! 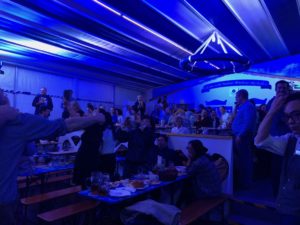 My visit coincided with the last night of Oktoberfest and before my memorable casual-Italian dinner with Kempinski’s big-boss Asia Pacific Michael Henssler, I met up with him and Brice Pean – see photo above. Brice Pean was already in his lederhosen.  He was off to join hundreds of locally-based Oktoberfest fans in a blue-lit tent popped-up next to the main Paulaner.  After Michael Henssler and I had enjoyed our glasses of Ruffino Riserva Ducale Chianti Classico Riserva 2013 in Via Roma, we called in to see the beerdrinkers.  We coincided with the long dance, the conga of Munich.  Oh what fun at this luxury young hotel!  SEE THE OKTOBERFEST DANCE, AND THEN SUITE 1515