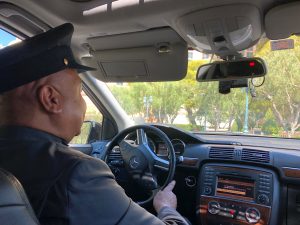 Some things don’t change when a luxury hotel switches brands. This time last year Mandarin Oriental Las Vegas was one of that non-stop city’s top names.  Then on 29 August 2018 the hotel metamorphosed overnight to become Waldorf Astoria Las Vegas.  The people continued as before – although the oriental uniforms with arm flaps worn by females on front desk look pretty silly (mind you, says the gal, it is difficult to see them anyway as the light is shines in through big windows behind front desk). Some things never change. The very gentlemanly limo driver, Walter, is just as gracious as ever. 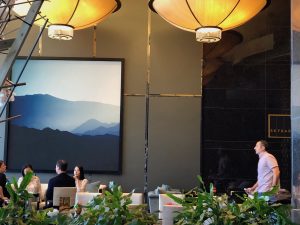 Part of the 23rd floor lobby

He told me how he picked up the incoming GM, Allan Federer, on his arrival.  This was Mr F’s first-ever visit to Las Vegas and, at the airport, he immediately hopped into the front seat of the car, saying by way of explanation ‘I want you to fill me in on everything about the hotel and the city’.  Sadly I missed Allan Federer as my stay back at this hotel was arrival 0015 and departure 1000 the same day, and anyway it was Virtuoso and he had all the top Hilton people, from head of luxury Martin Rinck down, staying with him. Some, making their first visit, must have had their eyes opened both by the sleek PKF sculpture that is the 60-floor building which houses the hotel, and its residences, and also at the Adam Tihany interiors. 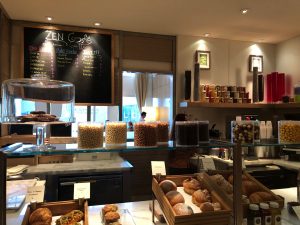 Walter later told me that apparently there are plans to take the lobby, now on the 23rd floor, down to the ground floor.  This will make so much sense, for many reasons including taking away the glaring light behind front desk staff making it impossible to see their faces.  I hope the 23rd floor’s lobby of mock gold bars remains, with 1,516 bars stacked up to a height of 14 metres. Presumably TWIST by Pierre Gagnaire, the signature restaurant leading off that 23rd floor place, will not change. Already, however, the casual bistro has of necessity been re-named. Once MOzen Bistro, it is now, sensibly, simply Zen Bistro.  Sadly I had no chance to eat there. 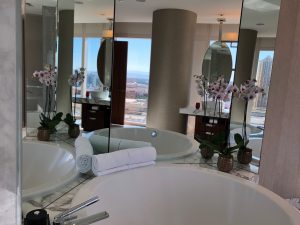 After going past an eighth floor oriental trellis wall screen enroute to the Technogym, which opens at 5 a.m., I arrived back at suite 2014 coinciding with private dining.  Yes, I did have a really satisfactory room service breakfast, on the requested dot, the table bearing what I ordered plus flowers and iced water. Suite 2104 does still have some oriental furnishings, but toiletries are now Ferragamo Tuscan Soul.  And then I repacked, to move on from the briefest of stays in this lovely hotel. Now I look forward to seeing what Waldorf Astoria will do to it design-wise, though I do hope that they do not do anything at all to the sleek and timeless bathroom.

SEE THE REST OF THE SUITE, WHICH STILL HAS A DISTINCTLY ORIENTAL LOOK, BELOW