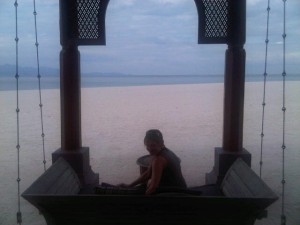 Looking from the Rhu Bar, Four Seasons Langkawi, to the Andaman Sea

Langkawi is included – as Jewel of Kedah – in 1,000 Places To See Before You Die, published February 1st 2012 by Workman Publishing.  The author, Patricia Shultz, has added 200 new entries, 28 more countries and some 600 colour photographs since her first edition.

Now you can find Estonia, Nicaragua, and even Vanuatu, where the gal had that memorable lunch on the beach some years ago.  Patricia Schultz is a long-time journalist who lives in New York City.

She has also written 1,000 Places to See in the United States and Canada Before You Die – wonder if she has included the Tudor-look Algonquin at St Andrews-by-the-Sea, New Brunswick, an 1889 Tudor pastiche of rambling rooms that Fairmont gave up managing end 2011; it now looks as if it will be Marriott (when the gal stayed in 2005, room 459 lacked a desk, the minibar lacked a leg and there was hardly any water coming out of the shower…).

As if forming an Irish flag, Alastair McAlpine, GM Four Seasons Langkawi, stands in front of an orange wall

Back to Langkawi.  Schultz says the entire archipelago of 99 islands (usually just called Langkawi) was given the title Jewel of Kedah by the Sultan of Kedah in celebration of his golden jubilee in 2008.  What we know as Langkawi, Pulau Langkawi, is about the size of Singapore…

Before flying back to Singapore, there was time for lunch with Alastair McAlpine, a Northern Ireland wonder who got into hotels when he was 12, staying at The Breakers, Palm Beach, with his parents.

To fill in time, he helped the valet parkers hang keys up. An elegant gentleman walked by, asked if he would like a coke.  This was Tom Wicky, the General Manager, who made a quick call to get a coke and he, McAlpine, saw the waiter RUNNING.  Wow, he thought, I want to have the power of a General Manager. 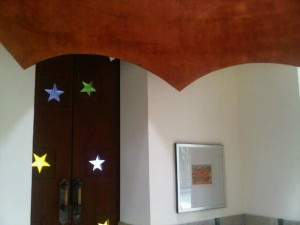 Looking up at a somewhat bizarre business centre

This is a colourful luxury resort (some say a hint Moroccan). There are bright bursts of apple green walls, or orange walls, or, in the Rhu Bar, what can best be described as blueberry mousse.

There are also hints of Bali or Thailand, thanks to the DNA of designers Lech Bunnag and Bill Bensley, who also oversaw the design of the 90 acres of grounds.  Fortunately, I saw, there are bicycles for the occupants of the 90 rooms and suites.

McAlpine says there must be 300 bikes in all, from tiny-tot fairy cycles through to serious mountain bikes.  They are all named, to prevent room 70 stealing room 71’s…  Interestingly, far away at Fairmont Mayakoba, on Riviera Maya, bicycles are deliberately not named or numbered and it is a case of getting on the first bike you see, which results in lots of jovial ‘hide my bike so you cannot take it’ moments.

Part of one pool is deliberately shaded

This is a place for beach lovers.  Masses of white sand front a very calm and safe stretch of the Andaman Sea looking across to Thailand, 45 minutes’ away by speedboat. Many guests ‘disappear’ beneath umbrellas or wherever.  Others may be around the pools.

There is an adult’s only lap pool and, far away, there is a families’ pool complex that includes one pool that is intentionally half-shaded.  There are also suites, of course, that have their own pools.

Does Malaysia have any railways left?  Silly question, of course it has, including its stretch of the Bangkok to Singapore Eastern & Orient Express that I took a few years ago.  Anyway, there must be thousands of railway sleepers used here at Four

Lunch on a table made from railway sleepers

It comes on a big round dish, set down on our table, made out of yet more railway sleepers.  I think back to dining back in England, at The Pig, which has similarly used railway sleepers to form dining tables, indoors in the Conservatory. Here I am lunching outdoors, looking at the blue sea.

Oh the colour. The rush-round tour includes a visit to the Sodashi spa, each of the eight rooms a separate villa with garden and steam room.

We also visit what is undeniably the world’s most over-the-top business centre, with two domes rising to about 25 feet and joined by a lower ceiling with inverted orange cupola. Yes, there are four work stations but, like me, many visitors must simply come to gawp.  I see a room, with a Moroccan-shaped inset bathtub. And I am ushered into a Mercedes, whisked away to the next girlahead destination.