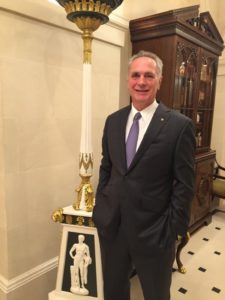 Oh what a difference really great flowers make. It is generally accepted that Jeff Leatham started the trend.   Bye-bye Constance Spry, hello today’s creative geniuses, some of whom are hotel employees, as at London’s iconic luxury Lanesborough hotel. There are other unique selling points here, actually. One is the fact that it seems to have been here for ever, and yet it only opened as a hotel in 1991. Another is that Geoffrey Gelardi opened it, as MD, and he is still here and young as ever (he was enticed by Atef Mankarios, then heading Rosewood, who said ‘we are doing a hotel in London and we want you to run it’). There are others who have tenure heading top properties, but the gal cannot think of anyone who opened one, and is still on site 25 years later. 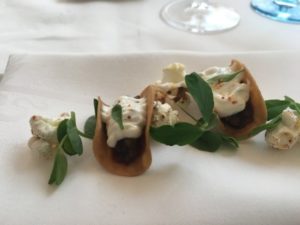 Perhaps it is the fascinating people Geoffrey Gelardi meets, every day and all hours. Sit with him and he is invariably popping over to greet someone of global A-List importance. He is out of the office every afternoon, however, for his daily squash work-out, obviously another secret of his success. And then he eats right. Just having been with Scentered queen Lara Morgan, who also says wellness starts with what you put in your mouth, I was fascinated to see a Gelardi pre-squash lunch choice. We were eating in Céleste, the hotel’s conservatory restaurant that is, thanks to late designer Alberto Pinto, a Wedgwood confection of duck egg blue and teal with white wedding-cake highlighting. 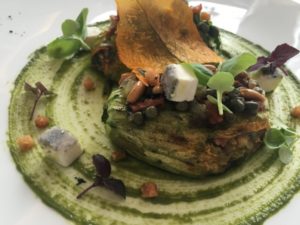 The culinary side is overseen by Eric Fréchon, Michelin three-star chef at Le Bristol, Paris (like The Lanesborough, it is Oetker). His chef on-site here is Florian Favario, and his manager, who also sounds Italian, is Enrico Molino. The whole ambience is European, with tables set with Italian linens (Rivolta Carmignani), French porcelain (Bernardaud), English cutlery (Heritage) and Austrian glasses (who else but Riedel?). We both started with an American-themed amuse, of home-made popcorn flanking tiny wraps holding quinoa and lemon-scented yoghurt. The hotelier then went on to sea-rainbow trout, slow-cooked and served in a bowl, with broth poured over. I diverted first to avocado and smoked eel on guacamole, and then another starter, courgette flowers with fresh goat cheese and smoked tomatoes. 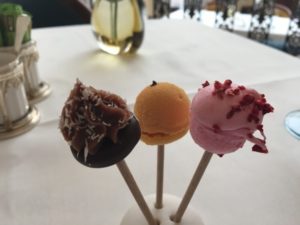 Neither of us wanted dessert but patissier Nicolas Rouzaud could not resist – his team sent out lollipops. Why is it that anything on a stick is so instantly desirable (a topic for another article, another day)? As I left I thought, again, that this is one of the few luxury hotels worldwide that can be said, despite its internationalism, to be not only quintessentially English, with global flavours, but true style, without having to shout about it. Le Bristol, and Brenner’s Park, and other Oetker hotels fit into this select band, and so too do such independents as The Goring, here in London, and, in Washington DC, both The Hay-Adams and The Jefferson, but only one other brand could suitably be included. One key is having a boss who is indeed, to paraphrase Gilbert and Sullivan, the very model of a modern English gentleman.  NOW SEE WHAT A BELGIAN CANCER DOCTOR WHOSE HOBBY IS LUXURY TRAVEL THINKS OF THE HOTEL, BELOW