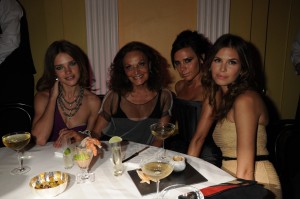 Musings on Diane von Furstenberg – and others – yesterday left the gal thinking about what DvF is doing for that fabulous luxury hotel on the corners of London’s Brook Street and Duke Street, Claridge’s.

They were unveiled in June 2010, at a fashion-studded launch party, and the world’s press quickly wrote about her sleek-greys-creams bedrooms, and the Piano Suite, with its sage and purple cushions for a bit of wow.  Of course Alexandra Champalimaud has also worked on Claridge’s, which loves its design. 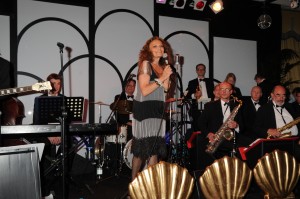 Diane von Furstenberg, and backup, at the Claridge's party

Viscount Linley has done some suites and a lot of furniture bits, and every year, introduced by then-GM Philippe Leboeuf, now running Mandarin Oriental Paris, there is a once-off couture design on a Christmas Tree.

John Galliano started this annual extravaganza, but then he became too extravagant in another way, and now Alber Elbaz, the raved-about designer at Lanvin, has taken over.  (I met both Victoria Beckham and Elbaz, a bijou Moroccan brought up in Israel, at the annual International Herald Tribune Business of Luxury conference, at InterContinental London Hyde Park, and he seemed so utterly sincere and down to earth compared with some other designers in the fashion world.)

Did Michelle Obama also arrive at Villa Padierna by Bentley?

And so on, once again, to design and hotels.  Let us be whimsical today.  If Michelle Obama designed a hotel interior what would it be like?  When she stayed in the fabulous Villa Padierna Palace Hotel, the one-time Ritz-Carlton above Marbella,  she and 60 close aides and 300 staying off-campus had an intimate time summer 2010.

That was when a baby submarine was parked in the luxury hotel’s man-made lake.  Just in case.  She herself was in 603, a three-floor, two-bedroom villa with its own 240 sq ft pool.  The interiors are soft sand with hints of purple, as designed by Ed Gilbert, a long-time friend of the owner of Villa Padierna hotels, the lovely Ricardo Arranz.  But whimsical is at the forefront.

Were Michelle Obama to design a hotel room it may well be purple, but it would have some yellow, and all the chair backs and the bedhead would wear little-girl cardigans with short sleeves, and perhaps pompoms on them.  Look out of the window in the MO-designed room and there would be a private garden tended by local school kids growing vegetables.

The nearest hotel to Blair House, the official Washington DC guest house of The President of the United States, is the Hay-Adams. When Samantha Cameron, a.k.a. Sam Cam, went to Washington two weeks ago with her husband David (Prime Minister of the United Kingdom, in case you did not know, and there are no doubt some in the UK who could not give you his name), they stayed at Blair House.

I am sure they would much rather have stayed at the Hay-Adams and experienced true Leading Hotel service, but still.  Sam, a professional designer, unfortunately relies on a former PR ‘executive’ in the fashion world for her clothing style. Unlike the divine Kate Middleton, who always looks fabulous, and often in one colour, Sam Cam blends far too many conflicting colours.

If she is trying to look ordinary rather than the step-daughter of an Earl (Astor) and wife of a Prime Minister, she ends up looking a little saving-money.  She always has a belt, as if emphasising that her regular runs with society’s top trainer Matt Roberts means she, unlike the average in the UK, does have a waist. 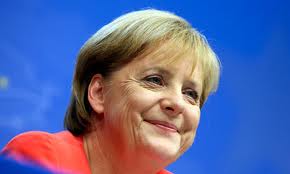 Carla? Wait a few days for Carla Bruni-Sarkozi. For a really comfy hotel, meanwhile, the one designed by Chancellor Merkel would be the answer.  Forget Philippe Starck bits and pieces and the sleek colourings of Jacques Garcia (as at La Mamounia and the Selman, both in Marrakech).

Forget the colour sense and subtlety of Pierre Yves Rochon (as at Four Seasons George V in Paris and Jumeirah Essex House, New York).  Here, thanks to designer Angela Merkel, we would have black floors and black walls up to a waist-height dado.  Above that, plain colours might be a soft rose, or a muted sage.

There would be matching chairs and sofas, all oozing ‘comfortable heritage, the design does not count and we must not spend too much money anyway’. But this hotel would get lots of repeats.  (At this stage, let us switch to Little Hans, a story told by Matthew Taylor, CEO of the Royal Society of Arts, and picked up by the Financial Times.

Baby Hans does not speak. Even by age 11, he still does not speak. He is eating his strudel when his mother hears ‘this strudel is bitter’, in German.  Both parents exclaim, ask why he had not spoken before.  Looking steadily at his parents he says, obviously also in German, ‘up until now, everything was satisfactory’.) 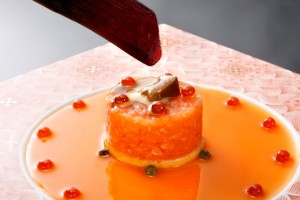 What does not sound satisfactory, by the way, is one of London’s latest ‘must try’ restaurants, called Hedone. Its signature dishes include an onion with shavings of pear, part of a menu that ‘reacts daily’ to fresh produce….

I would much rather stick with comfort food, in the form of the fabulous variety of caprese salads I eat around the world, and fish and chips and so many other dishes.  Come to think of it, my dinner at MEGU Midtown could well become a comfort food.  Thank goodness for MEGU, which means ‘blessing’.