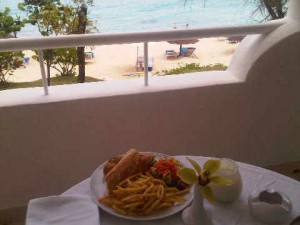 The perfect baguette sandwich, on a balcony at La Samanna

Think of France.  Think baguettes – and that is what the gal ordered on arrival at La Samanna on St Martin.  Straight to bedroom, check room service, order a Mediterranean baguette for lunch on the private terrace of B-15, the very room I had on my last visit. What bliss, looking down at yet more white sand and yet more azure sea, but now no wind, and it is cooler.

Think about baguettes, apparently introduced to France from Austria. Americans cannot make them properly, according to Wikipedia, as they use convection ovens.  For the record, real baguettes need steam ovens that melt dextrose on the bread surface, for a slightly glazed effect.

For the French lawmakers, a baguette can only be made of wheat flour, water, yeast, common salt and a maximum two percent broad bean flour, 0.5 percent soya flour and 0.3% wheat malt flour… but unfortunately French law is over-ridden by EU laws out of Brussels, which means that a supply company in Barnsley, England, is able to sell ‘baguettes’ to the French rail company SNCF. 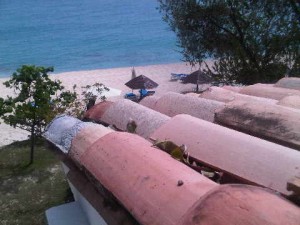 .. and view down from B-15's private rooftop

So far today this travelogue has taken in three Caribbean nations, two with a French association.  First, my new friend from Annecy, Haute-Savoie, Bernard Sarne. insisted on driving me, in a Lexus, from Cap Juluca down to the ferry point.  During the 15-minute journey we talked about a much-needed campaign to educate guests, which yours truly seems to be leading (at others’ requests).  The worst Sarne had ever come across were from the R-realm.

At his last place, La Samanna on St-Martin – yes, the second French association but be patient, please – at La Samanna, one morning he was called early morning by the duty manager, please come quick. He went to the full breakfast room to find an ample guy who was not exactly over-blessed with beauty, with a Miss World-type female, demanding to be served by him, the hotel GM, rather than any (N-word).

Dead silence in the entire restaurant. Sarne said quietly that St Martin is a part of France and under French law, as John Galliano found to his cost, racism can lead to a giant fine and imprisonment. He wanted the man and his missus off the premises in 30 minutes, one way. The entire restaurant clapped. 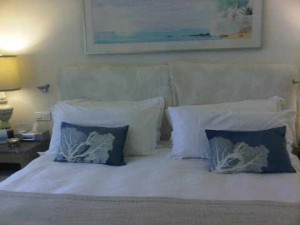 Life is one story after another.  Yesterday at lunch I was next to this stunning woman, another Miss World type, with long hair down.  She drank her champagne and was extremely cosy with her Corona-drinking companion, with a hair bun on the top of his head.  On the ferry from Anguilla to St Maarten the other seven passengers included the another-Miss-World cosying up to a Very Waspish guy.  Both wore wedding rings… at the far end of the cabin, not talking to them at all, was Mr Bunhead.

He is Australian.  What was going on? Thoughts that perhaps he was a travelling tantric sex specialist were momentary as he, and another-Miss-World, never made eye contact and did not say goodbye to each other when we all disembarked.   Anyway, we have now reached our second country of the day, St Maarten. Get off boat, go to an immigration building, yet another passport stamp. Picked up by a guy wielding a La Samanna board and off we head across a non-existent border to St Martin, and the resort. 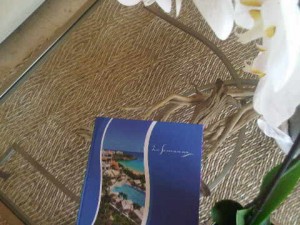 .. looking down, past the orchid and a copy of the hotel's splendid art book on a glass coffee table, at the rush mat on the marble floor

This is white (again), with soft edges and cosy-compact.  The entrance reminds one of another Orient-Express jewel, La Residencia on Mallorca. The lobby feels as if its normal size has been squeezed, inwards and downwards, for greater intimacy.  I am rescued by a cheerful woman who puts me in another buggy and off we drive, right side of the road now, to villa B, as in Bougainvillea, and up 17 tiled steps to room 15.  I order my baguette sandwich and look around my new home, which is infused in champagne – colour, not liquid – throughout.

Shades of what Alexandra Champalimaud has done at the ‘new’ Bel-Air in Los Angeles come to mind.  Spotted-champagne marble floor, plain champagne plaster walls and ceiling, softly-striped champagne drapes… add light oak (desk, a sensible trolley, and the fronts of units in the kitchen) and shades of blue (the bed’s day pillows, the azure ocean visible over the outside terrace).  Under the glass-topped coffee table sits a cleaned wood-branch sculpture, just like the one in EDGE in Four Seasons Miami. The room also has a hint of The Saxon, in Johannesburg. 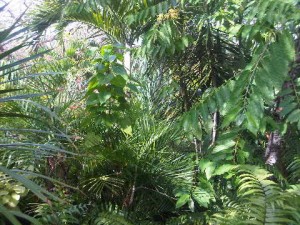 Dense greenery in the beautifully-tended gardens

There are five-blade overhead fans, and easy-work (remote zapper) air conditioning controls. I eat the baguette, filled with mozzarella, tomato and eggplant paste, and head up 12 marble steps to my private rooftop, big enough for a party of 20. Missing the other 19, I party by myself, soaking up the atmosphere. I look down over terracotta tiles, think the Mediterranean and Italy (would love to bet back to Castel Monastero for biking through the vineyards, and whole-mozzarella caprese sitting outside the wine cellar..).

Back down at ground level, look up at that rooftop, how others must envy it. All around is dense greenery, the type that hints of rainforest. How others, who live in concrete jungles, must also relish La Samanna for its space and its meticulously-tended gardens – 35 of the 400 employees are garden guys and gals.

This will be the biggest worldwide challenge at luxury level, says the charming Charles de Resseguier, a Biarritz son who, no, never worked at Le Palais (I use it for socialising, he says with the aplomb that is uniquely French). He did an MBA at Insead-ESSEC.  Smart guy.   We talk people, the talent side plus the social side, mutual friends.  The buggy stops at Bougainvillea, and after 17 happy footsteps back up the terracotta steps, with fallen blossom on them, I am home, to plan my next move… perhaps to the spa, or the gym?