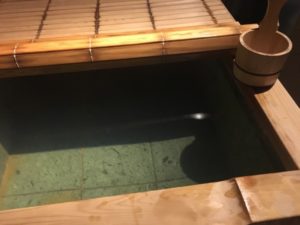 Private onsen on the balcony of suite 301

Suiran, which means green skyline, is a bit of everything. It is in the Kyoto area, but also half an hour outside the old town, in gorgeous rural Arashiyama. It is old, built around its Kyo-Suiran restaurant (see photo above). Originally constructed 1899 as home for the founder of Kawasaki Heavy Industry, Baron Kwasaki, it is today a Mori Trust’s hotel division treasure. The luxury hotel is part ryokan, with over half of its 39 rooms having private onsen tubs, but it has modern luxury hotel standards – no walking round in public in yukatas, here. The gal was in the 95 sq ft Presidential Suite, #301 (see the video below), which has the most gorgeous reed-covered stone onsen bath, totally private, on its 50 sq ft balcony. The water, apparently, is trucked over from a spring the other side of the calm Hozu River, immediately next to the hotel. It is reheated to near boiling, in the onsen tub, and thrown out, for garden use, after every guest. Local authority inspectors, presumably in their ubiquitous hard hats, test everything to meticulous sanitary standards every month. 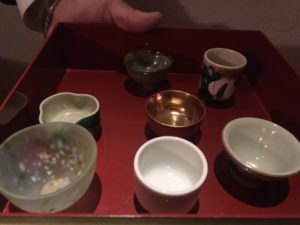 I dined with Hiroshi Komoto, the always-laughing GM who, as a Tokyo teenager, had worked hard to earn money to spend holidaying and watching his beloved American football, in Hawaii. Later, after graduating, he went into sales but after 3.5 years selling brake stuff to railway blokes, he switched, sensibly, to hospitality, to be schooled and then trained on the job by Hilton, at Disneyland Tokyo. The menu here is multi-course, one set meal which changes seasonally but they are flexible, and no problem reducing my choice to three dishes, sashimi on a gorgeous antique patterned dish, grilled Omi wagyu with abalone, and an honour-the-seasons dish, minnow for autumn, yellowtail for winter and bamboo shoots for spring. Our saké was preceded by choose your thimble-sized cup, and the icy-cold brew came in a metal jug. 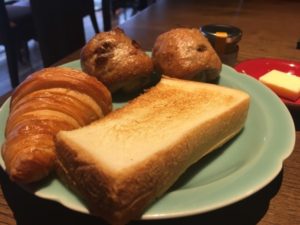 My post-prandial sybaritic delight was a late night onsen, just getting out before the suggested 20-minute maximum. I was in it again before daybreak, and the dark of the night was highlighted by little white specks. Yes it was SNOWING, and when dawn broke, how gorgeous it was looking down, through my all-glass windows, at grey rooftops below now lightly covered with white. Back down in the Baron’s house, looking out at centuries-old well-groomed trees – think podiatrist Bastien Gonzalez going into full-size bonsai – breakfast offered two choices. Thirty percent of guests here, typically, are domestic and they all choose Japanese, and many of the foreigners do too, opting for tofu of the day with a soft-boiled egg, vegetables, grilled fish, and rice porridge with starchy sauce, Nameko mushrooms and pickles. I went international, which meant superb yoghurt in a cut-glass bowl (my room’s two hemispherical washbasins were also cut-glass), eggs any way and automatic breads choice, a delicious nut and walnut roll, a light as air croissant and toast, typically Japanese style, always white, always exactly one inch thick – I measured it. 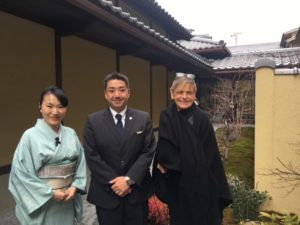 The preserves were the Australian Beerenberg and the coffee was just as good as the Nespresso I had made earlier, up in my room. Caffeine- fuelled, I wrapped up warm and trekked up to a beautiful stepped hill behind the luxury hotel, in Kameyama Park. I joined hundreds of hikers and Japanese holiday makers in admiring the view, down to and along Hozu River, with its pleasure boats working even on this snowy day – at peak times, cherry blossom, May’s new-bud period and autumn’s leaf colours, this must be like Piccadilly Circus, or Times Square. Back home, the Porsche Design Rimowa and I prepared to head off. The ever-thoughtful Komoto-san was, by the way, not only waiting to say goodbye, but he insisted on escorting me all the way to the shinkansen. NOW TOUR PRESIDENTIAL SUITE 301, BELOW.