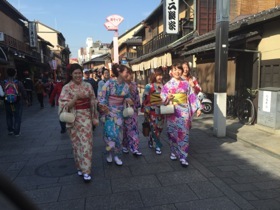 A typical Kyoto (side) street scene

There is something so serene and calm about Japanese women in kimonos, and they sure do wear them in Kyoto. The go-ahead mayor, Daisaku Kadokawa, is doing all he can to encourage tourism, with nearly a thousand free WiFi hotspots around town, and the main tourism website, Kyoto Travel Guide, now in 13 languages. He also encourages the wearing of kimonos, for both sexes (is it true there are tax breaks for shop owners who ask their staff to wear kimonos?). All this results, said the Japan Times, September 12th, 2014, in a whopping 51.62 million tourists a year, making Kyoto Travel + Leisure‘s top destination, worldwide. What good news, says the gal, for the city’s luxury hotels. 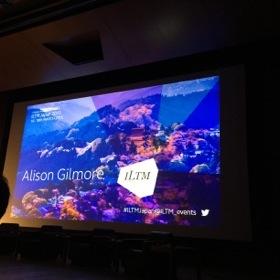 The T+L accolade is actually thanks in more than a large part to the annual ILTM Japan, which this year held its third event in Kyoto. As always, the event started, March 16th, 2015, with a Forum at Kyoto National Museum. It was introduced by ILTM’s Senior Director Alison Gilmore, and the first speaker, JP Morgan‘s Tokyo-based economist, Jesper Koll, was totally riveting – a 20-minute speech with no notes, no visuals. He beamed positive thoughts. This is indeed Japan’s new golden age. It has clean air, no traffic jams or litter, and bankers will lend up to 90 percent for a home (45 percent of all households have no debt, and after 18 years of stagnant wages, Toyota and others are initiating increases, and converting part-time to full-time work). 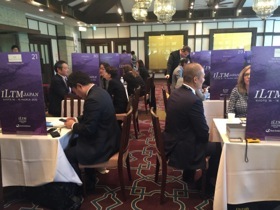 Then came two days of speed-dating, pre-arranged meetings, 1,340 in all, 20 minutes and then move on. Every exhibitor has a table, and it is premium travel advisors, with suitable luxury clients, who move around. Half were Japanese, buying foreign travel destinations. Others, from Australia, Brazil, Canada, Egypt, Hong Kong, Italy, Malaysia, Russia, Switzerland, UK, Ukraine and USA, were learning about new-to-them places to visit in Japan. The business part of ILTM Japan was held at Sodo Higashiyama, an amazing only-in-Japan conference venue with different old-style buildings in an exquisite Japanese garden with historic rocks and small shrines. 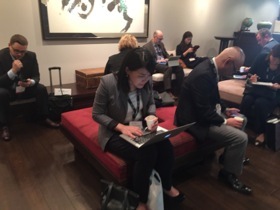 .. with much-need catch-up breaks between

But luxury hotel managers and travel agents need breaks, and between those 20-minute sessions, and during longer breaks, it was hilarious to see the mighty and the good relaxing, or checking messages. A top travel professional’s work is never done, but there were evening events to take the mind off dates, figures, trying to work out visa restrictions and things like that…