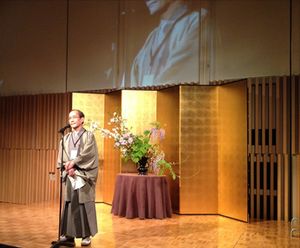 The Mayor of Kyoto says welcome…

The Mayor of Kyoto, Daisaku Kadokawa, is an unusually perceptive ambassador for tourism, which, as he knows, is one of the mainstays of his city’s income (Kyoto is also headquarters of Nintendo but that does not exactly attract visitors). Kadokawa-san was insistent, two years back, that Kyoto should host an International Luxury Travel Market, as a result of which ILTM launched in March 2013.  The gal was here in Kyoto to support, and speak at, ILTM Japan 2014. This was a marvellous and friendly gathering of about a hundred of the top luxury hotels and other travel products, and travel buyers (travel agents), roughly half-half in Japan and the rest of the world. 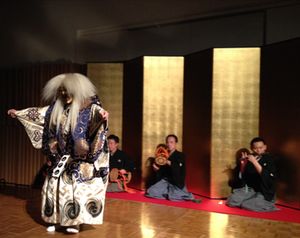 A Noh dancer, and back-up musician

The opening forum was held at the beautiful new National Museum building, opening September 2014 – it is designed by architect Yoshio Taniguchi, who also did the revamp of New York’s Museum of Modern Art MoMA. The forum had a minutely detailed description of Japan by Hitoshi Yoshimura, and a fascinating explanation of what Japanese, and Chinese, and Asian travellers in general want (brilliantly moderated by NHK World producer-correspondent Craig Dale) – and I shared global destination highlights. We then all moved across the street to the lovely bamboo-embellished Hyatt Regency Kyoto, for that evening’s official party, co-hosted by the Mayor.  The party was non-stop Louis Roederer, if you wanted it, and carefully-timed short demonstrations of flower arranging, painting and Noh drama. To the backdrop of four stern-faced, cross-legged drum-stompers, a Noh actor in terrifying mask and dishmop of a wig stomped too. Apparently Noh usually goes on all day, and everyone does his own thing. 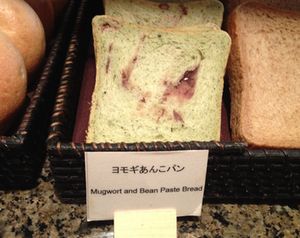 Those lucky enough to be staying here, at Hyatt Regency Kyoto, merely then had to go upstairs to bed – Super Potato has done all the interiors, which are light wood, simplicity and calm.  In the morning, they opened the gym for me specially early, and then I was one of the first at breakfast.  Hey, what fun, the toasting breads include mugwort and green bean paste.  Having swallowed that clam sashimi a few days ago and survived, I am game for anything, or well most things, and I must say mugwort – usually referring to Artemisia vulgaris and with a bitter taste used to flavour meat and sometimes beer – makes a not unpleasant bread. 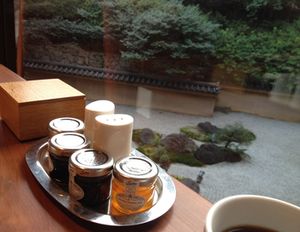 Breakfast, looking out at a Japanese garden

It is ironic to be sitting here in Kyoto looking ahead at a fabulous breakfast buffet, with a pizza oven behind, and, to my right, down through the glass wall to a peaceful Japanese garden.  My table is set with that old English staple, orange marmalade by Tiptree, just as used in British Airways’ First and Club (Business) cabins around the world.  I wonder yet again at the business sense of transporting tiny round heavy glass jars of jam, halfway round the globe. As I have said before, few other nations produce plausible marmalade.  The US version is too sweet, but Australia does Beerenberg, Austria has D’Arbo, France A l’Ancienne and Switzerland, Hero… 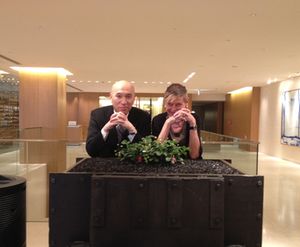 This hotel, run by Ken Yokoyama, is celebrating its eighth birthday this month with strawberries.  You are offered a chocolate-dipped strawberry on arrival, and an incongruous piece of heavy-metal sculpture in the otherwise-pale-bamboo lobby has live strawberry plants atop. And after breakfast we took the bus up to the charming SODOH Higashiyama Kyoto entertainment complex – traditional ancient houses set in traditional ancient gardens with flowering trees and paved walkways that were treacherous for the Blahniks and Louboutins. There, the pre-scheduled meetings, travel products and buyers, took place. 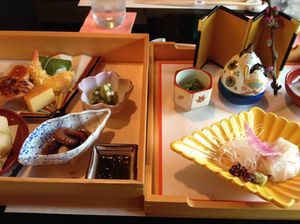 A two-tier bento box, opened up (note the standing screen)

I took a break from all this, and the world of luxury hotels, for lunch in a traditional ‘little place’ along a paved road ten minutes’ walk from SODOH. As we went in, to another traditional ancient house, we took our shoes off, went across tatami mats to our table. A kimono lady whose teeth would not have been up to Hollywood par brought moist real-linen towels and a double-height bento box, which she opened up. We both thought this was our meal… oh gosh, finish this and we get shabu-shabu, a big steaming bowl of broth with duck breast slices, and tofu, in it.  We are supposed to go on to dessert, but Alison must get back to the outstanding show she is running and I have a meeting.