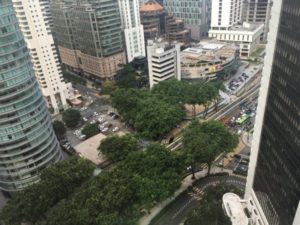 Shangri-La Hotel Kuala Lumpur is a significant luxury hotel that has dominated Jalan Sultan Ismail since it opened in 1985. In those days the hotel had 701 rooms, and a work force of 1,400, of whom 46, including the world-class Area Director of Communications, Dato’ Rosemarie Wee, are still here (Dato’ Rose had her own birthday party here at the hotel a couple of months ago, it was themed Wigs & Staches and her husband, an airline pilot, looked magnificent in a turquoise-mop wig). Now the hotel is down to 606 rooms, and once again the gal was in 2607, handy for the elevators, and with a great view.Yes, even in the centre of a city that is becoming drowned in tall skyscrapers, it is possible to find greenery and solace. 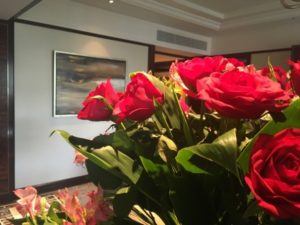 One of two big flower arrangements in 2607

Look at the koi pond, above, in the gorgeous gardens beyond the main hotel lobby on the ground floor – like all early Shangri-Las, the lobby’s rear wall is entirely glass. Work out in the really big LifeFitness gym and you look through all-glass windows into a bamboo garden. When I arrived I was given a big spray of flowers, and, a sign of thoughtful luxury, there was already a water-filled vase, the right size, waiting in my room. Other signs of thoughtful luxury? Lots of whole fruit, and the fruits I especially like. Anyone in the know, by the way, stays here in a room that gives access to the Horizon Club, a massive and light-filled space, reached by elevator or 23 curved steps up from the main lobby. Although I had a full office-set, in a leather box, and a printer in my room (here is that adjective ‘thoughtful’, again), the Horizon Club is first class for any business needs, and there seemed to be just about enough seating at all times. 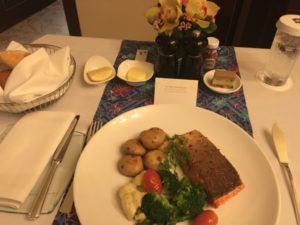 Cleverly, the breakfast chef in the Horizon Club works in a corner kitchen area that becomes the bar counter at cocktail time. And the people working here know what each regular guest likes – this is your table, sir, and can I bring you a glass of Shiraz (it is Bilyara 2015 Wolf Blass, no skimping here)? Because it was a Sunday, I chose to have room service dinner, and look at what appeared, in exactly the stated 25 minutes. I liked the fact that any grill item allowed me to order any three sides, not specifically one-each starch, vegetable and sauce. Note, by the way, the attractive patterned runner, that would not have shown any creases even if there had been any (there were not), note the capped water, and the breads. 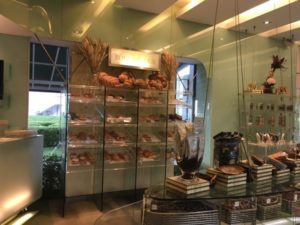 I have written before about the importance of food in the Malay culture, and this hotel’s GM, Manfred Weber, an Austrian who actually started out as a chef, after he had found engineering boring. He says the staff canteen is so good he eats there whenever he can (perhaps they might even invite me, next time?). I wandered around the main, guest, part of the hotel checking out other dining opportunities. Of course there is, being Shangri-La, a Shang Palace for Chinese, plus French, Japanese and a grill, and an all-day buffet designed by Adam Tihany (see a video of it, below). I was also impressed by the bakery café-to-go, clever. It was, however, time to say goodbye to this luxury hotel and, even though it was nearly the hour for the post-dinner-final-meal, my farewell was splendid, and, as the WiFi-enabled Mercedes stopped at the airport 60 minutes later, smiling Eddy Yusree, one of the world’s best hotel Airport Executives, whisked me on my way at lightning speed.  NOW TOUR LEMON GARDEN CAFE, BELOW