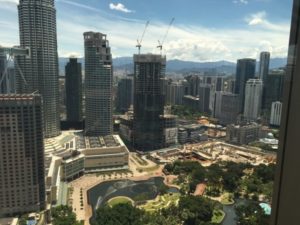 View from THIRTY8, looking across at the Four Seasons construction

The gal is continuing her sojourn, getting-to-know Kuala Lumpur again. Time to think about KLCC, Kuala Lumpur City Center, and its surrounding luxury hotels. The area is dominated by the 88-floor Petronas Twin Towers, designed by César Pelli, and now the logo of this city, the equivalent of the Statue of Liberty, Big Ben or London’s Tower Bridge, the Eiffel Tower, Singapore’s Marina Bay Sands ‘standing comb’, and Sydney Opera House – pity the major city, say Los Angeles or Hong Kong, which has no architectural logo. KLCC, as an area, has grown up so fast, and the park in front of it now has mature trees. It is also, as the photo on the left shows, unfortunately being nibbled at, by construction. 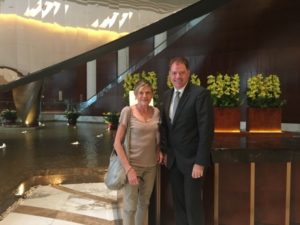 Robert Dallimore, the Melburnian who runs Grand Hyatt Kuala Lumpur, showed me the view down to KLCC from the 38th floor of his 40-floor hotel. Across from us is a green-glass tower that will be a 200-room Four Seasons, 20% owned by B.S. Ong: it should have magnificent views but, oh dear, in front of it, as we look down, are two massive holes in the ground. The one nearest to the Petronas Towers was to have been a Raffles but apparently it is now going to be a Fairmont, with a staggering 750 rooms rising up to the building’s 67th floor. Surely it will hide most of the Four Seasons’ views? I do worry that the fabulous greenery of KLCC park is threatened like this. 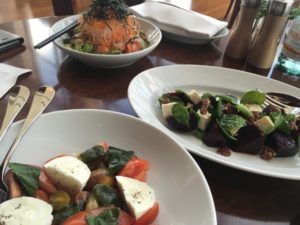 Already part of its circumferential running-jogging-walking circuit, originally 1.3 kilometres, has been hidden under construction. Particularly at weekends locals flock to KLCC, and for the shopping in the enormous Suria mall just in front of the Twin Towers – for retailoholics, Mandarin Oriental Kuala Lumpur is actually the most convenient place to stay. But enough of KLCC (though do see the video below). I turned my attention inwards, to THIRTY8, the Grand Hyatt Kuala Lumpur all-day restaurant that is best reached by 25 glass stairs down from the 39th floor lobby. The hotel’s top chef, Tommy Franssila, is Finnish-Swedish, THIRTY8’s chef Michel Eschmann, was trained at Switzerland’s Hotel & Gastro Formation Weggis – and the menu is globally eclectic. 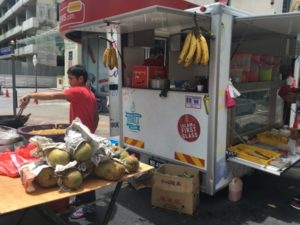 Many street corners have food carts

All the dishes are for sharing, and, for two of us, three salads were absolutely ample. We had a beetroot and feta bowl, and another salad with lots of different colours of tomato and bits of superb mozzarella, and, our third salad, sashimi blended with radish strings. I noticed tables of locals near us ordering again and again (the sushi seemed particularly popular). As I walked away from this important luxury hotel, I realised how they do think what busy business people today want – there is even a Truefitt & Hill grooming station, for a quick blow-dry or shave. And for locals, you need lots of food opportunities, at all times a day, as some seem to require culinary top-ups between breakfast and lunch, and lunch and dinner, and someone married to a Malaysian says that often, at ten at night and long after dinner is finished, it will be time ‘to go and have something to eat’. NOW WATCH A KLCC VIDEO, BELOW