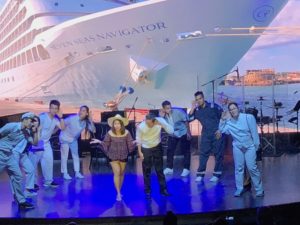 Against a backcloth of the ship…

The gal learns something every day when travelling – which, since she is on the road over 300 days a year, means the whole time. Firstly, yet again the luxury hotel world should follow the lead of the cruise industry in allowing staff, who also man the operation 24/7, to show their talents. Next, if doing so, go for the best.  Let the gal start with an introduction Two Morocco-born French music creators, Henry Belolo and Jacques Morali, working with lead singer Victor Willis achieved lasting fame when they formed Village People, named for Greenwich Village (among the trio’s hits were the 1980 feature movie Can’t Stop The Music, interestingly starring Bruce, now Caitlyn, Jenner).  Village People music is a theme of Krew Kapers, the addictive crew entertainment at the end of every Regent Seven Seas cruise. 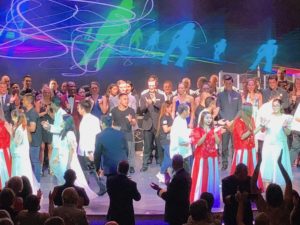 This started out, industry-wide, as a mere salute to the people who beaver away 24/7, seven days a week, making sure whatever ship you are on is spic and span, and there is plenty of excellent food and the gym equipment works and you never run out of towels, in your bathroom or by the pool. Actually, on this last, and super-magnificent, cruise on Seven Seas Navigator, sailing from the sun of New York north towards the chillier climes of Martha’s Vineyard, and the rain of Boston followed by temperate Bar Harbor, and getting colder Halifax NS and Corner Brook, Newfoundland, I had already hardly seen anyone sitting pool side. Next came days at sea and near-Arctic conditions of Nuuk (Greenland) and Iceland, with barely a hint of sun in sight. 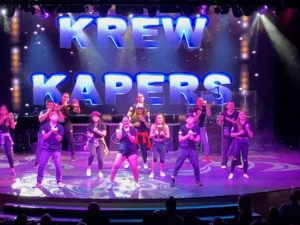 But who cared?  As one of the 490 passengers on the totally-full ship said, this is a ‘tour vacation’, in other words with an educational aspect. Everyone was happy, and the entire passenger complement trooped in very early to the tiered Stars Lounge to salute the 340 crew. There were video farewells, from the captain right through to some of the room stewards emerging from under beds.  There were live performances from troupes of Filipinos and Thais, who are all born entertainers, and three Indian gentlemen performed a national dance.  And then, sure enough, there was a parade through led by the captain, and the cheers resounded. 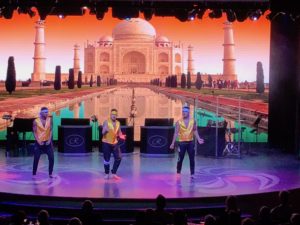 Compère, as always, was the amazing Ray Solaire, who has been working at sea for over 50 years, but when he did his solo entertainment evening, his voice was that of a youngster.  He is at sea for months at a time, sharing his cabin with at least 20 statement waistcoats and matching ties, and three complete sets of marionettes, some lifesize (what must it be like to wake up in the night and see a stuffed emu looking right at you?).  Everyone working onboard, however, is part of the team.  As the Village People song says, “you can make real your dreams. But you got to know this one thing, No man does it all by himself – just go there, to the YMCA”.