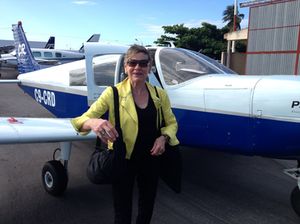 Luxury travel is full of extremes. The last significant plane the gal took was British Airways’ splendid new A380, where there was so much room up front that three people could have shared my space. But the only way to get to the next luxury resort on the agenda is by four-seater Piper, which eventually was ready to take off from Pemba airport, almost as far north as you can get up Mozambique’s coast before crossing into Tanzania. At least one passenger was dressed for business rather than an Indian Ocean heaven, but never mind. 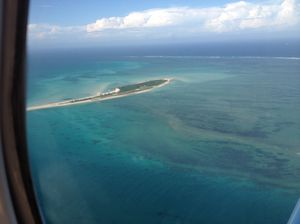 Looking down at Medjumbe

It is a 45-minute flight to Medjumbe, which is one of the 27 Quirimbas Islands. What a sight it looks, down below. It is all of a kilometre long and only 300 metres wide, at its maximum. The island is owned by a Dubai-based sheikh, a beverage magnate, who has fallen in love with Mozambique, bought quite a lot of land, some of it mainland, and started Rani Resorts. My time here, at Medjumbe, is quite fortuitous as the sheikh has sold 25 percent of Rani Resorts, and given management, to Thailand’s most famous resident American, Bill Heinecke, and this will become one of his Anantara Resorts. 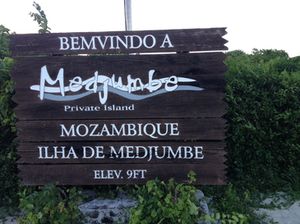 Medjumbe of course has an airstrip, albeit a bit bumpy (it runs west-east and the prevailing wind is north-south), but instead of an impersonal terminal there is a welcome sign, and the management team puts up flags for arrivals, and is there to greet you. You walk about 200 metres along a pink-brick-road (I think of Dorothy and her yellow brick road), winding between ten-foot green bushes soaring up out of the sand. A few crabs scuttle away, disturbed from digging their holes. Eight of the 12 identical villas, thatched with makuti, coconut, are hidden down to the left, by the white sand beach. 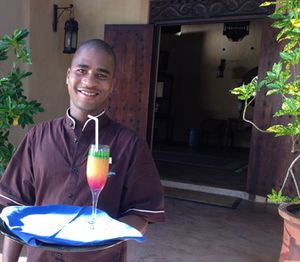 At the main lodge, one of the smiling guys who make this place work is waiting, with a welcome fruit drink in the national colours of Mozambique. Yes, they are all guys here, the only girl is Karen du Plessis, who is joint General Manager with her husband Jason. A few bits of vital information are explained. Breakfast and dinner are seven to ten, lunch is 12 to two, choose lunch at breakfast, dinner at lunch (make sense?). It is all-inclusive but some beverages and water sports and the spa are extra, sign and pay on departure. Thanks to entrepreneurial Vietnamese investment and a big satellite dish, there is excellent WiFi, here in lodge’s foyer, but mobiles do not seem to work anywhere. 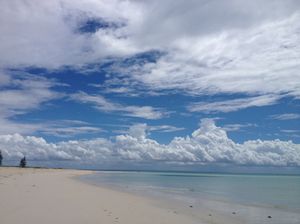 The sky changes by the minute…

My two travel companions head to their villa, one of four the other side of the lodge. I head back to mine, number 11, awe-struck by the sky as I walk. My villa is about 600 sq ft in total, raised up three steps, on a wooden platform that also has outside seating on the rear terrace, with a hammock and a small plunge pool with jets, and underwater lighting. Rear steps lead straight to the beautiful white beach, in a curved bay. Back inside, I have a four-post bed with (not-needed) mosquito netting, an enormous Samsung for watching Al Jazeera, and indoor and outdoor showers. A three-blade fan hangs from the rush-covered cathedral ceiling. 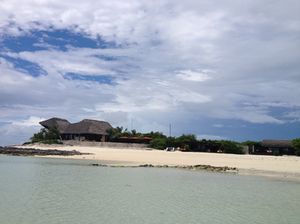 .. and looking back to the lodge

I head outside again – this is an outdoor place, the television is for the few rainy days, apparently – and look at yet another sky formation. I look back at the lodge of this luxury resort, with its soaring coconut thatch roof….