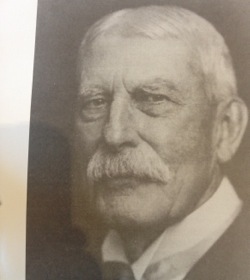 Henry Morrison Flagler, 1830-1913, came to Florida in 1878 for his wife’s health – when she died, three years later, he married her nurse, Ida Shourds. This guy thought big. Despite the death of 700 labourers, and occasional hurricanes, he constructed a railway that island-hopped all the way 127 miles south from Miami to Key West. It was finally broken by a massive hurricane in 1935, and replaced, in 1938, by today’s Florida Overseas Highway, Highway 1, which has 42 bridges, one of which, Seven Mile Bridge, alone cost $83 million. Flagler also built luxury hotels for his railway guests, and his pride was the Casa Marina, designed, like all Flagler hotels, by Thomas Hastings and John Carrere, who later did New York’s Public Library. 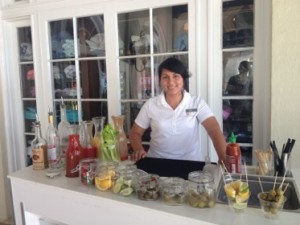 The stately Casa Marina was originally a three floor building with spacious ground floor rooms with high ceilings. Side wings have been added over the years, so that it is now an open-C shape. The two main ground floor rooms, hardwood floored and columned like the main lobby linking them, are used for weddings and functions. One is also converted, every morning, into the hotel’s breakfast room. Some choose to eat inside, in the cool shade of the room, but most like to take their food, which includes make-your-own waffles, out to the terrace, to look over the pools, the professional sandcastles, and the blue sea. I wonder what Flagler would say if he could see the daily pop-up breakfast bar, with bespoke Bloody Marys and Margheritas? 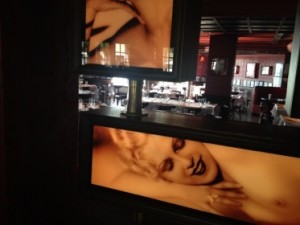 Breakfast room at The Reaches

Ah, breakfast. I mentioned earlier that there are two Waldorf Astorias here, not conjoined, not even adjacent but near neighbours and symbiotic. The Reaches, a 150-room hotel on an incredibly zigzag site, was bought in 1985, at the same time, by Barry Cohen and Joel Meisel, who thought it a good idea to operate both separately, but sharing many support functions. The Reaches in the main is less sophisticated – you might see guests returning to their rooms with what looks like a week’s supply of groceries, and there is only one pool. BUT, and a big but, look at its breakfast room! The one restaurant is leased out to Penny and Peter Glazier’s New York company, Ship House. The boudoir-type décor presumably passes, metaphorically as well as literally, over the heads of tiny tots.

Both these Waldorf Astorias evoke happy memories of another age, and many of the regulars, who flood here for Christmas, New Year and indeed year-round, want this era to go on forever. Flagler knew what he wanted in his luxury hotels and the ambience has become timeless. Outside the main entrance of Casa Marina I spy a J. Seward Johnson sculpture, a reminder of similar ‘people’ outside Conrad Hong Kong, and what is, since January 2015, InterContinental Dublin.   Here, the sculpture is smoking, again a reminder of another age.