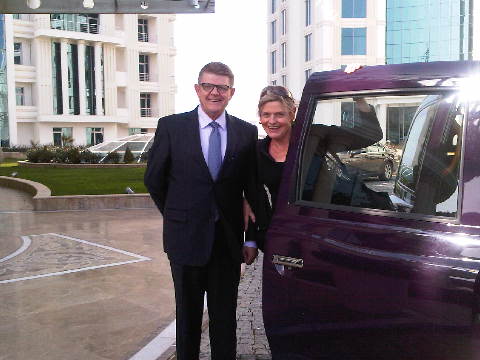 Thank you Henri Blin.  It was because of this seasoned hotelier that the gal went to Azerbaijan in the first place, and of course if she had not persevered with the trip she would never have got a preview of what will increasingly become one of the world’s top new destinations.

Blin learned, as so many good French boys do, to cook, and after working in Hôtel de Paris in Monte Carlo he joined InterContinental Hotels, then Kempinski and moved here, to Baku, with his wife and daughter Princess. 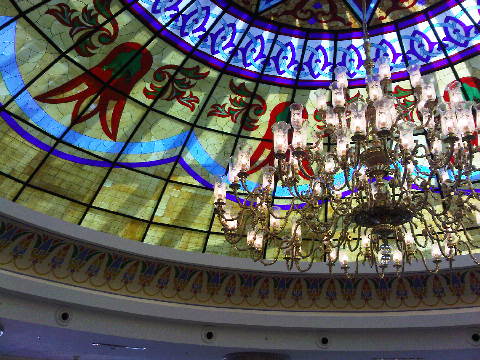 Kempinski Hotel Badamdar Baku, all of six months old, is the only five-star luxury hotel that is not down in the hurly-burly that is Old Town and the Caspian Sea coast.

As Vance Packard would have said in his brilliant book The Status Seekers, it has a big advantage in being up a hill.  It is up quite a long hill, in fact, and therefore it is a destination in its own right.  Think a subdued Mardan Palace (the glitz of Antalya), with 90 percent of the glitter removed.

Here you merely say the G word when you walk into the one-floor lobby, with a 25-foot diameter circular rotunda surrounded by eight gold-bottomed Egyptian columns and topped by a hemispherical multi-coloured glass rotunda.

Stand under it and whisper and you sound like a fog horn (is this why the white grand piano that stands there, open and ready to be played, is kept silent?).  Lovely people, in mole-coloured uniforms, await. 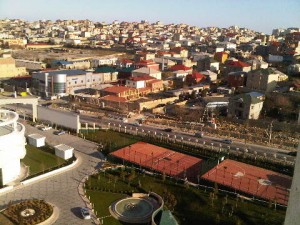 From suite 1405, look down to hotel's gardens, with tennis court, and across M. Mushfig Street to residential areas

Michael Kopf, brilliant German, brilliant concierge in his former days in Moscow, at Hotel Baltschug Kempinski, is now in charge of all this front of house, so to speak.  He is there to welcome me, at the ungodly Sunday hour of 0800.

After Azul (Azerbaijan Airlines)’s excellent flight from London Heathrow – take off and arrive on time and fabulous service all the way – and only two hours’ sleep, I barely have time to look around suite 1405, but I peer out of its big windows, one of which has a balcony.

I look over the surrounding residential area and the complex’s tennis courts.  Yes, this is a destination.  It already has 283 hotel bedrooms here, and an adjacent block it 37 big apartments.  It has a five-lane colourful bowling rink, and an Irish pub.

It will, come August, have over 70 shops in its mall, big-brands that, I am previewed, will all be themed for weddings.  Getting married?  You need not only frock and flowers but gifts and handbags and shoes and everything.  You need a man?  Will they provide that?  But this talk is premature. 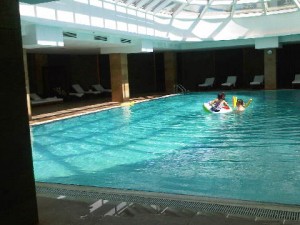 The basement pool has a glass-topped roof, to allow the April sun in

Right now there is already a mammoth subterranean fitness area.  The pool is near-Olympic, with a conservatory roof to the sky above.  Same idea as Royal Monceau Raffles Paris, where I was swimming exactly a week ago.

Here, too, you swim your laps, count’em and work out percentages as you go up and down, and you look up to the blue sky above.  You have, of course, already been in the big gym, Technogym thankfully.  You have also padded through the indoor garden, complete with stepping stones over a water feature and with fish in a big tank, that is the spa relaxation area as well as the walkway to the locker rooms.

All this is owned by Kemaleddin Heydarov, President of the Azerbaijan Taekwondo Federation, on whose behalf he is currently at a world Taekwondo meeting in Cairo, so I cannot meet him. 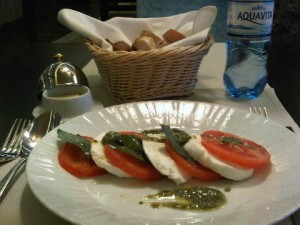 This is a pity as it would have been good to hear about the forthcoming ‘Burj Al-Arab lookalike’ hotel that he is building, into the Caspian off the main downtown Boulevard.  This will, apparently, also be a Kempinski.

He is also doing a ski resort in the north of the country.  Busy guy.  I do, fortunately, meet his representative, Austrian Peter Sulzenbacher, whose wife Tajana will be opening another Heydarov hotel, unbranded, downtown.

One of the many memorable things about this destination luxury hotel (which has a meetings facility for 500, by the way) is its food.  Chef Salvatore Barbara is from Sicily, which immediately says to you Good Grub.  The fresh supplies in Azerbaijan give him an ideal palette with which to compose.

His caprese, tomato and Buffalo Mozzarella with home-made pesto, is on a high rung to the genre summit, by my rating currently held by Castel Monastero near Siena. 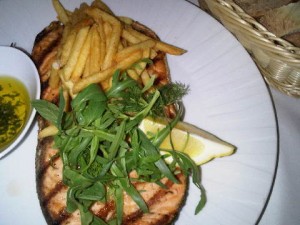 Fish and chips in Baku may well mean a large salmon steak, perfectly cooked, with shoestring fries and a herb salad

Persevere to get here, you luxury travellers.  I used that word earlier and patience is really needed.  It takes lots of time and money to get an Azeri visa.  You need an introduction and invitation letter, correctly worded so you can get a tourist, rather than business, visa.  The embassy then seems to require a minimum 12 working days, which of course does not take into account holidays.  But it is all worth it.

Food lovers are in their element once they get here.  As well as Blue Sky Hospitality’s fabulous restaurants downtown and on the Boulevard, all hotels I visited offer Fab Food.  Salmon seems to be the predominant fish, and fish is the main protein.  Fish and chips, Salvatore Barbara style, is thus a giant cross-cut of moist fish and yummy fries.  There is also lots of spinach. Go for it, lots of strength, Popeye to the forefront.