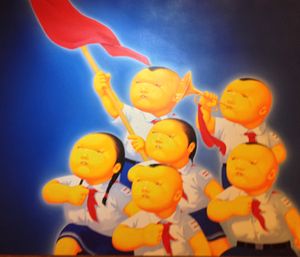 Call of the Bugle

There is something about modern Chinese art that is immediately recognizable, and luxury hotels that show it to full advantage are on to a good thing, says the gal. Kempinski Hotel Beijing Lufthansa Center partners with Beijing Central Art Gallery to have a constantly-changing exhibit in its enormous lobby. There are several by Chen Yu. This piece, Call of the Bugle, 100 x 120 cm, is by Zeng Huarong (he was born in Sichuan in 1970, and childhood memories are mud fights, swimming to catch fish, catching cicadas with peach tree resin and picking unripe fruit – there was a shortage of food – and watching ants fighting). 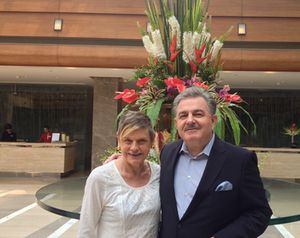 Gerhard Mitrovits stops for a second

Gerhard Mitrovits, who runs this 540-room hotel, is the very model of a modern Austrian dynamo. He is always on to something, always thinking of things. He extended the Paulaner brewery restaurant. He has re-done the Italian restaurant, Via Roma, so it now truly resembles a Roman eatery. This is all the more appropriate, coincidentally, in that the wine list – 100 wines by the glass, including Opus One, and Fattoria Nittardi Maremma, a boutique Chianti Classico vineyard owned by German publisher Peter Femfert and his Venetian historian wife Stefania Canali, who produce a bespoke label for Pope Francis. This is certainly an Italian hang-out. Europe’s most charismatic current Prime Minister, Matteo Renzi was staying here last week – though why did the discredited T. Blair have to chug along too? 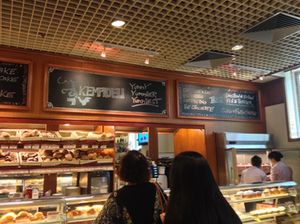 The Mighty Mitrovits never stops. He is extending the hotel’s Kempi Deli, which supplies locals with absolutely the best bread and cakes in town – the German ambassador’s wife was buying her healthy loaf as we passed and so of course Mr M. bounded in to say hello. And then he bounded out to tell me about his plans for a new spa and gym, and what will he do with the their current rooftop-eyrie space? And the rooms are all going to be re-done, and some rooms will be combined, two into one, and there will be glass walls between bed and bathroom areas and it will be just marvellous.   Running a hotel of this size, practically a city since it has so many add-ons, like offices and shops, does not daunt him. 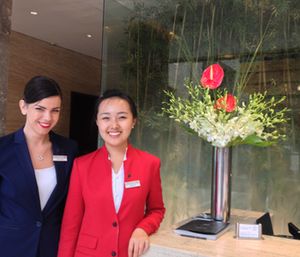 He ran the massive InterCons in Cairo and New York in years past…. He also has the most outstanding team, 1,100 in all.   Here are two of them. Judit Varga is concierge, and via her I was able, in the hotel’s WiFi-enabled BMW bringing me to the hotel, to order a room service lunch, for my arrival. Monica is one of the hotel’s stunning Ladies in Red, the hostess who met me, took me to my room, brought me that lunch, later brought me the hard-to-get Financial Times and put a big smile on my face. 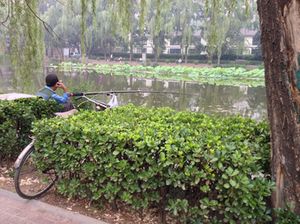 Morning calm, behind the hotel

People make a hotel, every time.   Actually I saw other people, out and about, as well. The main street in the front of the hotel, Liangmaqiao Road, turns into a pop-up market, especially at weekends. Go to the back of the hotel, through its garden and to a quiet lane, and you find yourself at the peaceful backwater of Liang Ma river. Here, every morning from daybreak on, there are old men, smoking, fishing, thinking back, perhaps, to their own childhood (did they, too, swim to catch fish, and fight with mud?) 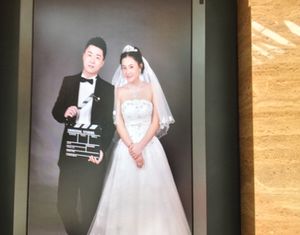 Getting ready for the future

Back in this luxury hotel that is so much a part of the community, a wedding is going to take place – this is a lucky year for weddings. The happy couple has posed ahead of time. A display board shows quickly changing shots of the bride and groom, and then a baby. Is this wishful thinking, or a fact? Another interesting question. But my life is full of interesting questions.