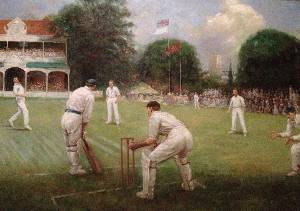 A painting showing a game of cricket, displayed at Summer Lodge

Cricket is the national sport – of England, plus India, Pakistan, Sri Lanka, you name it. It is thought it may have started in south-east England during Saxon or Norman times  and became an adult game at the beginning of the 17th century.

The first reference to its name was 1598, when it could have come from Middle Dutch krick (stick) or Old English cricc or cryce, meaning a crutch or staff.

The gal went to one of the most traditional of England’s country-house luxury hotels, the charming Summer Lodge just north of Dorchester, to have an English experience.  There, on one wall and among hundreds of amazing English history paintings, there was a game of cricket. 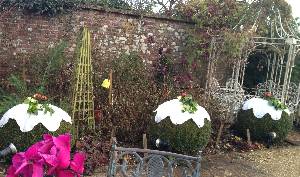 Outside the 24-room country house hotel, a building dating back to 1789, the gardens are immaculately tended by head gardener John. I have seen them in summer, when the flower beds are a pointillism of different colours, and people play croquet, Pimm’s at the ready.

Now, just before Christmas, John, in charge of all decorations inside and out, has turned his topiary bushes into Christmas puddings (now that is another English tradition, the English ‘plum pudding’, also known as plump pudding or plum duff, a thick fruit concoction heavily laced with alcohol and brought to the table flaming on the outside). 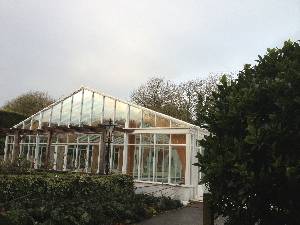 A luxury conservatory, in the garden, holds spa, gym, pool and sauna

Fortunately John has not decorated the conservatory, a simple construction that Summer Lodge’s owners, the Tollman family of Red Carnation fame, had built a few years ago in the walled garden.

This now houses the Relais & Chateaux hotel’s indoor fitness.  There is a small but well equipped gym, open whenever you want it, and a nicely hot sauna. The changing room has masses of stocks of robes and lots of towels.

I went first, actually, to the spa.  Where else is going to the spa an Alice in Wonderland experience, skirting rose bushes to have your body attended to? 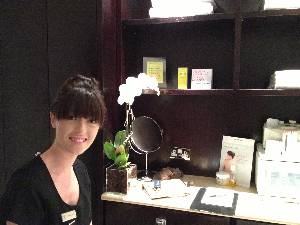 Sophie Cox, a local lady who trained in Stroud, is really skilled when it comes to understanding skin. She is also charming, which adds to the overall appreciation.

Many local women, she says, drive here for spa days, come and have treatments, come and enjoy the pool, have lunch in the main restaurant or here, in the spa – great if you do not want to get dressed up again.

Sophie uses Darphin products, named for a Parisian kinesitherapist, Pierre Darphin, who is said to have had a deep understanding of the science of skincare and beauty rituals. 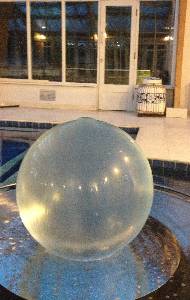 At one end of the pool, a water-covered ball seems continuously rotating

After that I plunged into the pool, 35 feet long by 20 wide.  By now it was dark so I could not see the herb and rose garden outside.  One end of the pool is decorated with a revolving water ball, the size of a small pilates ball.

Put  ‘revolving water ball’ into Google and the secret seems to be explained.  A ball of stone, in this case off-white, sits in an exactly-matching concave ‘holder’ into which water is poured that, apparently, causes the ball to turn, ad infinitum. It certainly makes you want to do more laps.

I think of other great English pools. At Jumeirah Carlton Tower, London, and  Four Seasons Hampshire you are also swimming in conservatories, at The Grove, in a modern ‘mediaeval barn’, at One Aldwych in a one-time printing-press room, at Chewton Glen in a Roman temple environment.  I still have not seen Corinthia London’s pool. 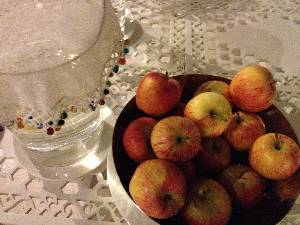 Along one side of this particularly luxury hotel’s conservatory is the sitting area, also used for nail therapy. I am impressed to see copies of The Sunday Times displayed for intelligent hotel guests (this is on a par with The Economist given free to guests at InterContinental London Westminster’s fabulously popular Blue Boar pub.

I am on a mission to persuade hotels to stop giving trash newspapers (The Independent or Daily Mail) and trash magazines (women’s monosyllabic glossies).  Talk up, gal.   The sitting area of the conservatory also has plenty of apples, and water – the latter rather charmingly covered with a bead and macramé-edged cover, just as my grandmother used for the milk jug.