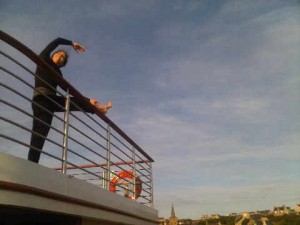 Yoga on the seventh deck of Silver Explorer

Keep fit when travelling, at all costs.  The other day an American who travels the world, the charming Kirk Kinsell, claimed that most travellers take their trainers with them and never put them on.

This is why he is setting up a new hotel brand, EVEN Hotels.   Take that word EVEN any way you like (at least it does not sound ‘odd’). The gal told Mr Kinsell that she does not agree with him.   She works out just as much on the road as she does at home.

Question, where is home?  Which luxury hotel room is it tonight? Kinsell is not the only hospitality provider to think of fitness: Celebrity Cruises‘ Silhouette has Aquaclass cabins close to gyms with personal trainers, and giving preferential seating in its ‘diet’ restaurant, Blu.

Anyway here are 10 best ways to keep fit when travelling. 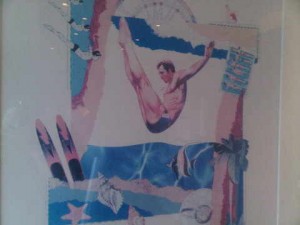 A poster on the wall of the ship's gym

1. Have your gear with you, or at least workout shoes and clothes other than a banana-tight Vionnet.

2. Stick to your routine.   If you clean your teeth every morning after breakfast, do you give up when travelling?

3. Be prepared for opening hours that are unsocial, at least to you.  You might be on Hong Kong time and you find the gym in Moscow does not open until eight Russian time.  If this is the case talk to the boss.

4. More and more hotels do now open gyms through 24 hours, but be prepared not to be able to swim around the clock. 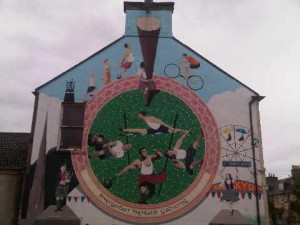 One of eleven murals on the ends of buildings in Invergordon High Street ....

5. Ah, swimming. Try to swim first thing after the pool opens rather than late afternoon when you might feel you are in a kids’ playground.  This is especially true in China – say Portman Ritz-Carlton Shanghai, where is pool is shared between hotel guests and the adjacent residences.

6. Some hotels in Europe, say Cavalieri in Rome, demand you wear a swim cap.  Most have them on loan.

7. You can be very flexible working out in your bedroom.  Use bottles from the minibar as hand-weights (if the minibar is the automatic kind, use your shoes as weights).  Use a bathtowel as a stretch band.

8. For quick cardio-exercise, choose a hotel that has convenient public stairs, say the Bellevue Palace in Bern. You can also always find the fire escape staircase but do not get into it without checking that the door opens both ways. I have had too many instances of being locked in a fire escape… 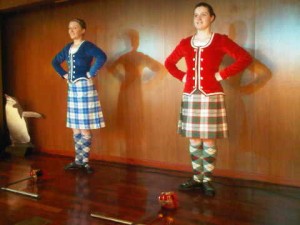 Highland dancing, as shown by young ladies from Invergordon

9. For this reason always carry your phone with a hotel number programmed into it so that you do not have to call your guy, which is middle of the night for him back home, to ask him to call your hotel to let you out.

10. There is always somewhere to run outside, if weather permits.  The biggest challenge is the mighty Sheraton attached to Frankfurt airport as no pedestrian can get out of the vehicle-only traffic system.  The secret there is to walk across to the terminal and run round it – though you do attract a lot of attention from night security and police dogs if you are jogging, as I was, at 0400.

On the Silver Explorer it is, to be honest, not as easy to work out as in luxury hotels.  There is no jogging deck, as on the ‘mainstream’ Silversea ships: the determined can walk the circuit on the sixth deck, dodging around sharp corners, bending to get under lifeboats and constantly in fear of a cleaning guy with a long broom suddenly nipping out of one of the doors, all of which open outwards. 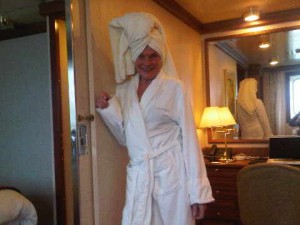 The Silver Explorer has an admirable, and hot, sauna, with a 30-minute timer

The most-fit, and most-chic youngster on the trip, Jessie from Montreal, was sometimes doing yoga up on the seventh deck (bet she runs straight up Mont-Royal, without stopping, when she is home). She also spends a long time on the LifeFitness treadmill in the gym, which is a satisfactory facility as long as there are not more than three people – one elliptic, one runner, one sit-back biker – wanting to work out simultaneously.

Of course there is a sauna. There are also, just like in hotels, stairs, lots of them: for me, it is 42 steps from the third deck to the sixth deck, and it is the late Queen Mother who is reputed to have said every step you take up adds three seconds to your life.  She died just before she reached 102. Hey ho, keep fit gal, and keep ahead.