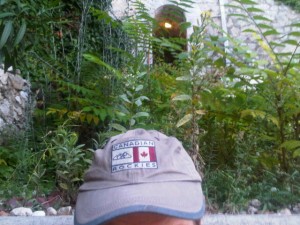 'The hat', about to ascend (steps behind) up Escalier de la Source Marie, under Blvd de Italie, up to Ave St-Romain, under Blvd du Ténard and more..

A gal finds it hard to be unique in Monte Carlo – but this one claims a first.  She thought it was 0630 when she awoke in the divinely-modern Art Deco pad that is the 85-year old Monte Carlo Beach Hotel.

She went for her usual run (Monaco keeps even its tiniest all-steps pedestrian slopes beautifully lit around the clock).  45 minutes later, she did think it was odd that no-one was yet stirring, that the usual commuter rush had not started.

Back home, she showered (lovely La Prairie toiletries) and put on her face. She checked the clock – 0430. Back to bed for three hours.  But the CCTVs showed her, complete with Rockies signature baseball hat, and she was the laughing stock of the beach, that day.

But it was time for more exercise.  Personal trainer Thierry was laid on for an hour, from 0900.  Gosh was he fit (had he spoken English he could have explained his own regime). I pushed and pulled, using Kinesis and the Pilates ball. 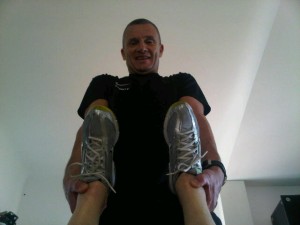 In between puffs there was time to think of other memorable personal trainers, at The Ritz Paris, and, in the Maldives, at Kanuhura, where the guy insisted on a run around the island.

And that led to memories of running round another island, Greenland, yes, the whole of ‘Greenland’, when that was the only one of Dubai’s man-made The World islands that was near ready, to show off to prospective buyers of the other islands.

Serge Zaalof, then running Jumeirah’s Madinat Jumeirah, suggested a pre-breakfast run.  Meet at the beach. Carry-her through the waves into a small speedboat, ten minutes out to sea to the only island, a few inches above the water, that had any habitation, in the form of a full-size two-floor house surrounded by mature palm trees.

Dock at the landing stage. Serge sits and smokes a cigar while the gal, ever enthusiastic, runs round and round the island, about ten times in all.  Twenty minutes later, back in boat for return trip, met at main beach, back to hotel room for shower and rest-of-the-day. 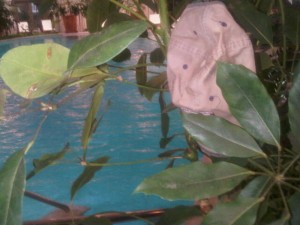 Anyway, Thierry finishes with customary stretching of legs and someone arrives, so thoughtfully, with four bottles of Evian water. But the day is not finished, of course.  On to Monte Carlo Bay Hotel – yes, a bit confusing but this one overlooks the bay and it has no beach, think of it like that and confusion evaporates.

Monte Carlo Bay Hotel has a fabulous Cinq Mondes Spa Paris.  Interesting, Cinq Mondes was founded in Paris by former Tag Heuer development director Jean-Louis Poiroux – but all its products (as natural and paraben-free as is possible) appear to be made in and transported from Canada…

After 90 minutes’ blissful sleep while Malvina did marvels to face, and hands and face while a mask was on (no photos, sorry!) I am given a form, marked with what she used.  Diplomatically, she has marked products for the over-30s, rather than the super-geriatric over-45s, age group.   And then there is energy for a swim in the Monte Carlo Bay’s amazing 150-yard indoor-outdoor pool. 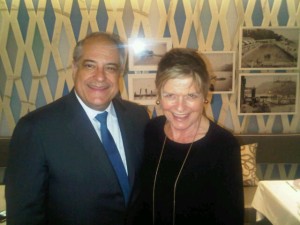 Once outside, I swim between a man-made beach (two floors up above the sea) and a dozen white loungers deliberately set in a few inches of shallow water.  Where else have I swum past the end of paddling loungers? St Regis Singapore is one other luxury city hotel that springs to mind.

Swim over, I pick up the faithful Rockies hat, patiently parked on a tree, and head off for the evening’s adventures – which includes saying hello to forever-young long-time friends in the affordable-luxury destination that is Monte Carlo, Monaco.