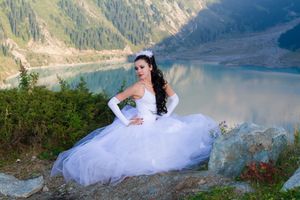 Every luxury hotel, it seems, is courting weddings, whether it has the unique wedding chapels of Conrad Bali (an inverted glass V-shaped tent) or Grand Hyatt Tokyo (a light-filled light wood shape rising to heaven).  Time for the gal to learn about weddings in Almaty, and the instructor is Hakan Demirceken, the genial Turk who runs Intercontinental Almaty – The Ankara in Kazakhstan.  Its name, he explains, is because the hotel opened on Independence Day,  December 16th, 1996, as the Ankara Towers, built by its current Turkish owners.  Turkey was the first country to recognize the breakaway nation. 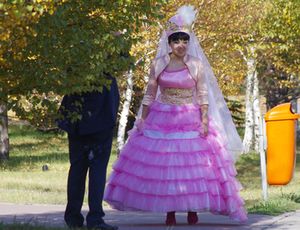 It was originally going to be mid-star but President Nursultan Nazarbayev not surprisingly wanted six-star or more.  In 1998 the hotel, right next to Republic Square, became Regent, and in 2006 it switched to Intercontinental (very good, says Hakan Demirceken). It has lots of weddings. A typical set-up results in a six-hours eating-fest, with lots of drinking, for around 250 guests, usually paid for by the groom, who pays an all-inclusive sum beforehand. The cost is likely to be $250 a head, which gives unlimited edibles and potables.  Right, want to know the format? 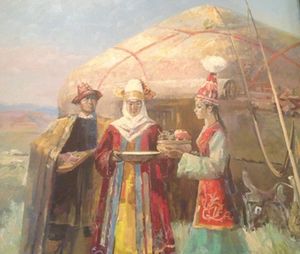 A traditional painting, at Intercontinental Almaty

Five o’clock, meet for cocktails.  At 6.30, move in to dinner. Round tables for ten are groaning so much that not a single inch of tablecloth is showing. Each table has one waiter solely in charge. These are mezze-type appetizers, with hommus and babagannouj and lots of cheese (the Kazakhs love cheese, at all meals, as I was to find at the hotel’s copious breakfast buffet).  Finally, this table is cleared, and hot appetizers are brought.  Next comes the first hot selection, which is probably beshparmak.  At this point all you squeamish might want to avert your eyes.   Beshparmak at wedding time is an enormous platter of thick home-made pasta topped by horse meat. 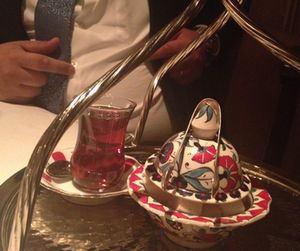 Chai, with traditional china, at the hotel’s Bosphorus restaurant

This includes the head. Ah, the head. This is an extreme delicacy. Your waiter gives it to the oldest person who then gives morsels to special people – an eye is passed to someone with great potential, as a sign to help see the future, the ears go to those who could benefit from listening to their elders. Wait, dear reader. We are not done.  Next comes fish, say salmon, and finally, perhaps as light relief, particularly for smokers and/or those with bladder problems, there is a half-hour break away from all the festivities – which, by the way, may well include several live entertainment acts, one after the other. 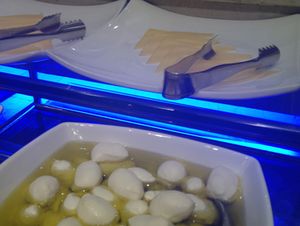 Cheese at all times – here, at the breakfast buffet

Back again.  Now comes another meat presentation, and the tables are cleared once again for presentation of fruits, and desserts and, finally, the wedding cake, and the offering of chai, green tea with honey.  And presumably the groom goes home with an empty wallet and 249 or so other participants stagger away with over-filled insides.  Wonder what a wedding was like in the days of yore, when so many Kazakhs lived in yurt tents and ate a lot of apples? The 294-room Intercon has masses of social-interest paintings around, plus, on the ground level of its ten-floor open atrium, a pond with a multitude of brightly-coloured fish (fortunately too small to be considered for any menu). 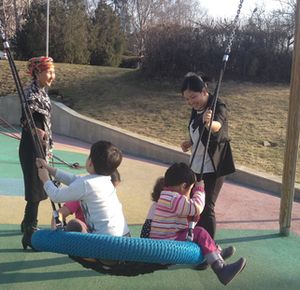 Playing on a swing at Republic Square

I look forward to coming back to this friendly hotel in summer, when the big garden and its beer bar, open until two every morning, are in full use, as are its two tennis courts – these must all be popular with the British Airways, KLM and Lufthansa crews who stay here (they also like, as I did, its Bosphorus Turkish restaurant). The hotel is a ten minute walk to the President’s Palace, Republic Square and its underground three-floor Almaly shopping mall – yes, another one, but this one has more-affordable stores. Today with the sun shining, families play, at ground level, on swings and roundabouts. Sadly it is time to say goodbye to Almaty and its luxury hotels.