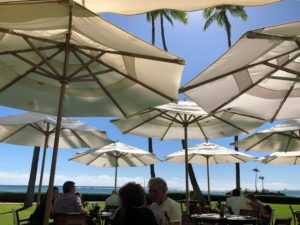 Looking out from Plumeria restaurant

Kahala Hotel & Resort was put up in 1964 by Conrad Hilton and Charlie Pietsch, at a then-exorbitant cost of $12 million. What is now one of the most outstanding resorts in the entire Hawaiian Islands is owned by Yoshiro Ito, who honeymooned here 40 years ago and still has such fond memories of it that he returns regularly, with his family (back home in Japan Ito-san, who is Chairman and CEO of Nagoya-based ResortTrust Inc, has a pretty massive portfolio of hotels, including the Baycourt Clubs, exclusive to members). The Kahala has a gorgeous beach, as above. The gal looked out at it during an idyllic sun-lit lunch, enjoying a Hawaiian Ahi Niçoise, with Nalo greens, Ho Farms tomatoes ad Hamakua mushrooms, outside on the terrace at Plumeria restaurant. 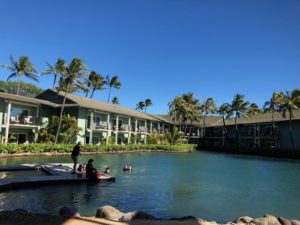 The Kahala gets 50% repeat guests, particularly at this time of year. There are many Japanese, and Koreans, but there are even more from the West coast of the US mainland, from Seattle south to San Diego. Among the many attractions are obviously watersports, including swimming with the Kahala’s resident dolphins: the swim experience here is run by Dolphin Quest, a Bermuda-based company founded in 1984 by two veterinarians, Rae Stone and Jay Sweeney, who now also run dolphin programmes at Hilton Waikoloa, on Hawaii’s Big Island, and at the National Museum, Bermuda. One of the Kahala’s dolphins, Hoku, even has a restaurant named after her. 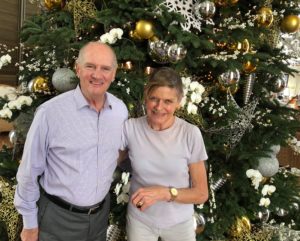 It is jolly difficult to take photos of the dolphins as they move so quickly – a main selfie spot here inside the 338-room hotel is much easier. Take 30 carpeted steps from the hotel’s lobby level down to a lower floor and you pass a living wall inset with dozens of perfect orchids, one of which really does smell of chocolate. Since Gerald Glennon arrived as Kahala GM in September 2016 a range of other activities has been added. This December, the Kahala Legacy Forest initiative was launched, to plant a total of 200,000 Koa, Milo and Sandalwood trees. An opt-out night surcharge of $8 a room means $48 saplings are planted: these can be dedicated to guests who can monitor, via GPS, how their trees are growing. 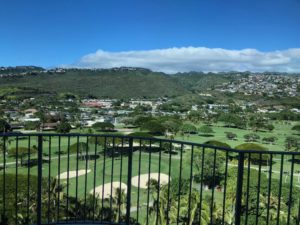 September 2017 saw the first Kahala Hotel & Resort Hawaii Invitational polo tournament, organised by local enthusiast Chris Dawson – as well as the resort, sponsors include Vranken’s Pommery, plus Cartier and Tesla, and Dionne Warwick sang (the next Kahala Hotel & Resort Hawaii Invitational is scheduled for September 15th, 2018). The resort’s diary also includes the annual Sony Open golf, which runs from January 8th through to 15th, 2018) – the hotel is conveniently next to Walalae Country Club, one of only 40 courses in the USA sanctioned to host a PGA Tour event. Some hotel guests do actually prefer looking over golf and other greenery, but I think my favourite at this well-rehearsed luxury hotel is beach-view suite #901, with a total of three balconies: it has two bedrooms separated by a ship-like sitting room with polished teak floors and nautical-look blue and white upholstery. AND NOW SEE A VIDEO OF THE ORCHID WALL