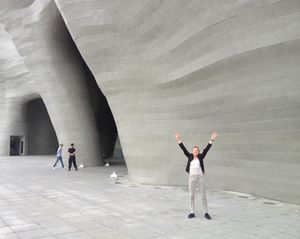 On June 27th, 2012, DaGuan – ‘lots to see’ – theatre opens in Shanghai’s Pudong area, and gal had a preview. Inside it is difficult to get a good photo when stand-ins are rehearsing.  Outside, among the concrete tree-like pillars that form one facet of the entire Himalayas Centre of which this is part, the effect is quite dramatic.  Jumeirah’s luxury hotel is part of the complex too, as you will discover. 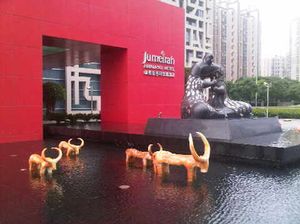 Entrance to the hotel

DaGuan Theatre will leapfrog to instant fame, not only because it seats over 1,200 and the entire centre part of the floor can be raised or lowered at the push of a button.  Use it for meetings, dinners, or theatre style. Why everyone will know about it is that Chinese Idol, a Shanghai Dragon Television franchise (Simon Fuller still owns the American Idol name), has been partly filmed here, ahead of time – the show’s judges are China’s Han Hong, Coco Lee and Huang Xiaoming, and Taiwanese producer Wang Wei-chung. 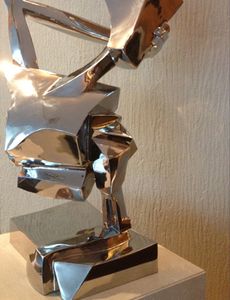 A sculpture in the Talise Spa

The opening of the theatre follows that of its sibling Himalayas Museum, whose inaugural exhibition, running from June 10th, 2013, has been highlighting ‘thoughtful charisma’. And immediately before the theatre opens its doors, there are such communal activities as 24 hours’ Sleepless in Art (June 22-23, 2013).  A thousand or more local people will enjoy a day-long carnival followed by a sleep-over in the museum – bring your own tents. And musician Tan Dun introduces his new composition ‘The Triple Resurrection, and there is tai chi and so much more.  Wow, after all that perhaps a trip to the spa? 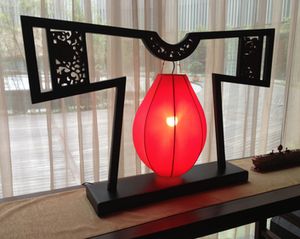 You know you are in China…

Fortunately Jumeirah Himalayas Hotel Shanghai does now happen to have a spa, a Talise, overseen from Dubai by Jumeirah’s wellness specialist Cedric Betis – he has not actually been here yet, and he will be in for a lovely surprise, especially when he is offered hot pumpkin soup after his treatment.  Perhaps he, too, will take in the incense ceremony that the hotel puts on every weekday at 5pm.  This is apparently very good for purifying the soul.  Perhaps he, too, will take the do-it-yourself art tour. 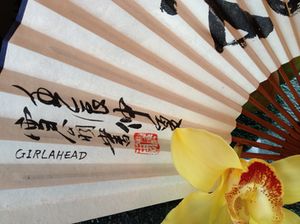 iPods pre-loaded with information take you around to look at over $10 million-worth of art collected by the Himalayas Centre visionary, financier and philanthropist Dai Zhikang. The works shown here include the Chen Yifei (1946-2005) portrait of Mao that swallowed up half the total budget.  There is still something about Chairman Mao that gets people excited. A weeny little house that he is said to have lived in is somehow being preserved among the high-rises of the Jing’An area in Puxi, and many are predicting it will be a popular backcloth for wedding photos. 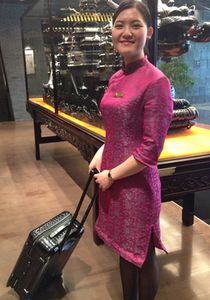 .. and the trusty Porsche Rimowa

Here, this luxury hotel has its own wedding-photo venue in the form of a rosewood pagoda, thought to date back to the 16th century, on a raised dais in its central lobby.  Dai Zhikang has lots of interests – or you could say he has many fingers in many pies.  He has written three books, and he founded the Dai Zhi Kang Education Foundation.  He also established the annual Shanghai International Film Festival SIFF, which this year runs June 15-23, 2013 (showing over 300 films in 26 cinemas around town – one favourite is Yasujiro Ozu’s 1953 epic, Tokyo Story).