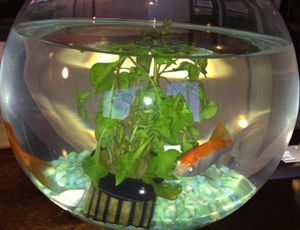 Fin & Bubbles were the gal’s companions during her stay at the luxury Sandton Sun hotel in Johannesburg.  A card, with her name on it, told her the goldfishes’ names, and said all she had to do was to enjoy them as they would be fed by hotel staff. Little touches like these make a busy traveller remember one place from another. But there are many reasons to remember the 324-room hotel, built above a shopping mall, and connected by airbridge not only to InterContinental Johannesburg but also to the Sandton Convention Centre. The Sandton Sun’s lobby has an open atrium that soars up to the 20th (top) floor, and from the glass-sided elevators there are pretty interesting views. 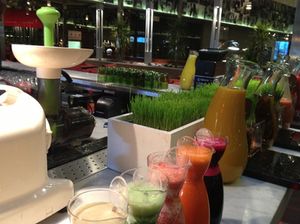 Say at breakfast, which is at Son, in the atrium lobby on the sixth floor – if the weather allows you can go to its terrace but I was in a hurry.  Sit at a booth, or sit up at a high-high table.  Wander the buffet and if you do not see the juice you want they will make it for you.  There is a juicer right there, in among displays of wheatgrass that I was not sure were for juicing or for eating like a rabbit – memories of my Caesar story – or what.  When Barry Sternlicht started W Hotels with the transformation of the former Court and Doral hotels in New York, the window sills all had boxes of wheatgrass on them, and watering cans were provided, but the idea of expecting travelers to water (with water, no comments please) did not last long. 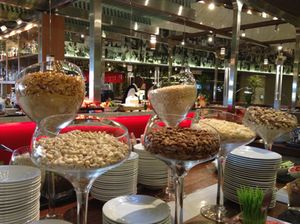 Another traveller’s tip: get to breakfast as early as you can.  You can have your choice of table rather than where they decide to put you.  The buffet displays look superb – before other guests start attacking them.  And, when the mealtime first opens, you hope the floor is clear of bits of bread and other debris.  Of course, too, the servers have much more time for you and will give you special attention.   And being ahead of the pack you have a better choice of newspapers. 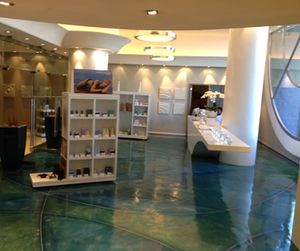 By the same token it is rather nice to be one of the first to have a spa appointment.  I said WOW when I saw this spa, it is gorgeous, like a giant ice ballet in a cave with a window to the outside world.  The flooring looks like highly-polished giant stone slabs (artificial, probably, but very plausible), walls are white with some ice-blue touches.  When you enter the main reception, there is this giant window behind you, looking to the outside world.  The eight treatment rooms fit the pattern, though they do not have windows.  What they do have is entire-wall illuminated views of South Africa; one has sand-dunes, another has a river view with a little cottage, and so on.  It is absolutely gorgeous, as is the Phytomer algae-type product that my lady skillfully used, coincidentally in that river room. 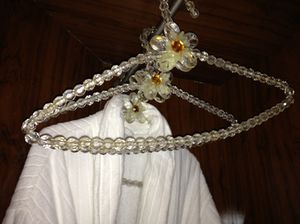 Another little touch from this hotel, by the way.  As well as all the usual gear in the changing locker in my river-view spa room, there were these unique hangers, like a giant necklace.  Bling that works is divine.  As always, however, a plane called, or rather it would not wait, so there was just time to finishing packing (five minutes), wait for elevator (a shorter time, fortunately), pay whatever (five minutes), hotel’s free shuttle to Gautrain (five minutes).  Another travel tip.  DO take the Gautrain to and from the airport, it is brilliant, but try to buy an entry card beforehand.  In my case I did not, and I had to wait in line for ten minutes while some stupid guy argued with the ticket seller.  Yes, I could have used a machine but I did not know the cost (120 Rand, in fact). 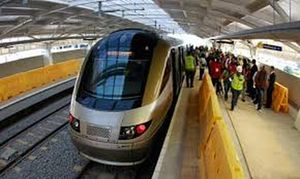 Gautrain, straight to the airport

Gautrain runs about every 25 minutes, direct to Johannesburg’s O.R. Tampo International Airport.  Once it leaves, it makes two stops en route and the total journey time is 15 minutes.  The carriages are really comfy and there are so many armed guards, on platforms and in each carriage, I could have worn The Queen’s most valuable tiara and got away with it. From luxury hotel to train to airport and, once again to a SLOW Lounge, for snacking pre-boarding.  This is the way to go, gal.