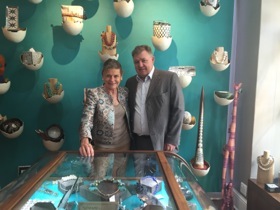 Sebastian Carré in the hotel boutique

The gal remembers talking to one of Lyon’s finest hotelier sons, Sebastian Carré, just before he was heading off to French Polynesia to open Four Seasons Bora Bora. He made it great, and admits he cried his eyes out when, after three years, he moved on to his next challenge. Now, after another three years, he has converted what was the post-colonial Westcliff ‘village’ into the super-luxury Four Seasons Hotel The Westcliff Johannesburg. What is now a 117-room urban resort opened for business December 1st 2014. Check in, turn right and you immediately see a stunning boutique, with Patrick Mavros silver and one wall bearing display units that are broken ostrich eggs. 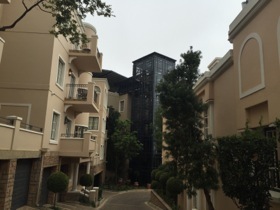 Now, an elevator soars up between existing buildings

Those who remember the previous village will still find a steep and zigzag cobblestone road winding up to the top of the grounds. Now, at the first bend there is a pair of glass-sided elevators to soar you up, no calories used, six stories above to the highest level restaurants and bar. When the new owners bought the property they said they would put in ‘a lift’, and they have gone magnificently overboard in what is not only useful but a sculpture that contrasts with the bedrooms’ cottages. 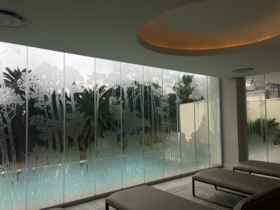 Looking out from the new spa

The views from atop still range over the wooded Johannesburg Zoo, below, and look across to …. There are new views added, these days. The spa, in a stunning structure that replaces the former covered carpark, looks out through semi-frosted glass walls, that can be pulled back when the weather allows, to see a decorative canal, and greenery, outside. The spa manager, Julanda Marais, last opened the spa in Four Seasons‘ Geneva hotel – she is one of many South African diaspora that Sebastian Carré has enticed to come back home. The spa block is integral with a new deli, and the 24/7 gym. 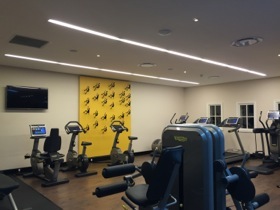 The gym, with a panel of sculpted ‘climbers’

Oh what a transformation – love this gym, with its great Technogym, and a wall bearing 24 climbing metal figures. I have seen their siblings before, somewhere – must remember which other luxury hotel has these charming little sculptures enlivening the workout area.