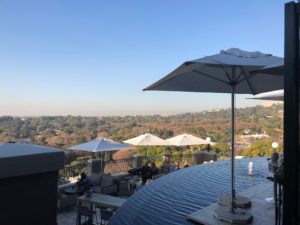 Four Seasons Johannesburg The Westcliff is, as its name implies, on one slope of a hill, hence the name of its art programme, Art on the Hill. 65 people, no space for more, enjoy an evening of Keith Frisley’s cooking plus a performance (see a jazz evening, above).  Coming up on August 25th 2019 is brilliant Pretoria-born Tutu Puoane: she is married to Belgian pianist Ewout Pierreux and it is really worth checking them, perhaps both, on YouTube.  Yes, a lot has happened since I was last at this luxury hotel, though the view from its many terraces is still the same. 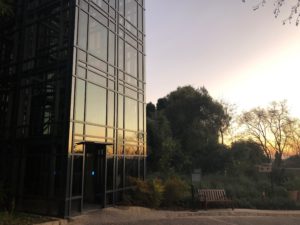 Today, elevators soar up the hill

The 117-room hotel was formed decades ago from a steeply-inclined winding street of houses. Restaurants are at the top of the hill, and now, fortunately, a pair of sculpture-look elevators make the climb easier – though walking the cobbled walkway is great cardiac exercise (the gym is down at base level, next to the hotel’s Deli, where I was happy to see regular local businessmen having healthy breakfasts enroute to their offices). Front desk and conciergerie are also down there.  Concierge Diniy D’Hamzah showed me how the hotel’s boutique is now run inhouse: it is displayed in the conciergerie and it is the concierges, who know what guests like, who do the buying. 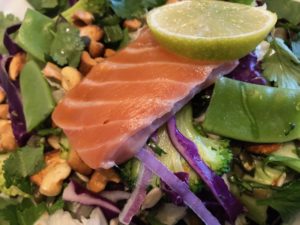 Current best-sellers with Americans, he said, are African-type baskets but made with colourful telephone wires rather than traditional rush. And then, in my lovely suite, I called down for nutrition guru Christine Phillips’ healthyourself.co.za Detox salad bowl, holding red and white shredded cabbage, bok choi, red onion, sugar snap peas, broccoli, fresh mint, coriander, sprouts, cashew nuts, seeds. There was Thai dressing to pour over, and instead of the optional chicken strips I opted for salmon. 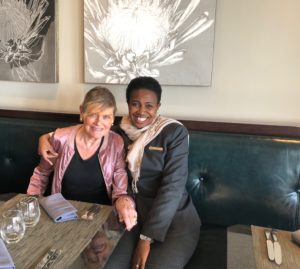 Dinner was at Flames with Aditya Ramani, the new F&B, and Natalie Harrison, a one-time restaurateur who now heads Four Seasons’ communication for sub-Saharan Africa.  We spent a lot of time talking ramifications of weddings, and much more, including guests’ growing enthusiasm for escorted cycling tours through Soweto, and guided explanations of Ponte Tower, the 54-storey structure that see-sawed from the height of whites’ luxury housing down to the nadir of under-privileged hangouts and now, up again, it is a showplace of arts+living+co-working. But there was time, too, to do justice to Knysna oysters and a Kalahari tomahawk, from the Karoo, and Southern Right Pinotage 2018 from Hermanus. Breakfast, in Vue, was memorable for Bernardaud and finest products, and for the magnificent manager Thando Madikane who skilfully managed to help me with a tricky finicky jewellery challenge. Well, Four Seasons are luxury hotels where nothing seems to be impossible. AND HAVE A LOOK AT SUITE 301