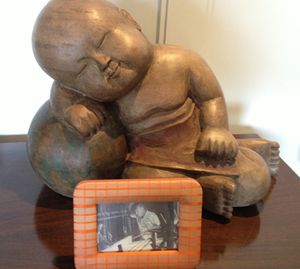 Sleeping Buddha – a photo of Jim Thompson in front

To be greeted by a sleeping Buddha when going into your bedroom in any luxury hotel is surely much better than a sleeping pill, and when that charming chubby fellow happens to be resident in the Jim Thompson Suite of Four Seasons Hotel Bangkok it is a doubly appreciated nightcap. The Jim Thompson Suite, as any man (and woman) of the world knows, honours Jim Thompson, king of silk and eternal master of intrigue.  As a long-time admirer of his, the gal was thrilled to spend a night next to the Buddha, and, by the way, several photos of the late master – that is him, in the silk-framed photo in front of the Buddha. 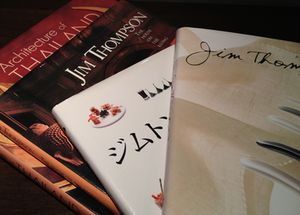 The suite has a selection of Jim Thompson books…

James Thompson was born 1906 in Greenville DE, the son of a wealthy textile manufacturer and the daughter of a noted American Civil War Union general, James Harrison Wilson, after whom he was undoubtedly named. He went to private school and after graduating from Princeton he started post-grad there but his inability to master calculus got the better of him and he joined an architectural practice designing homes for the East Coast rich in the USA.  He joined the Delaware National Guard in 1941 and was recruited by the forerunner of the CIA, then called the Office of Strategic Services. He served with French resistance in North Africa, in Europe and Sri Lanka before arriving in Thailand shortly after the end of WW2. 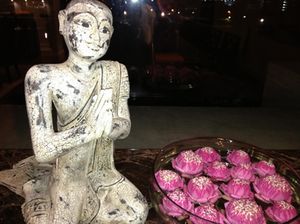 ..and lotus flowers and kneeling buddhas..

He was military attaché to the US embassy in Bangkok and after he left the army in 1946 he decided to revitalize the hand-woven silk industry (he and George Barrie set up the Thai Silk Company, whose fabrics were used in The King and I in 1951, after which his name was made).  Bright colours in dramatic combinations were the name of the game.  People wove at home, thus earning much-needed income for the family.  But then comes the mystery.  On March 24th 1967 he travelled to the Cameron Highlands of Malaysia with Connie Mangskau, who lived at what is now The Siam in Bangkok. After church with her and other houseguests, Jim Thompson went for a walk. 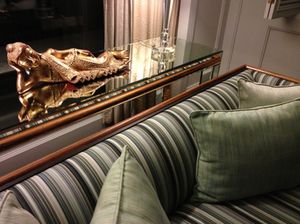 And that was the last time he was ever positively seen, although someone claimed they saw someone looking like him going to the golf course.  Enormous searches, lasting days and days, were carried out and many rewards were posted. There have been numerous theories as to what happened. Some bones were found in the vicinity in 1985 but for some extraordinary reason they are in a safe and have never been analysed for DNA.  His reputation, if anything, is bigger with every passing year: I am told that Chinese are particularly attracted to Jim Thompson stores when they come to Bangkok. 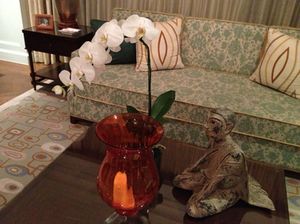 Another view of the suite

There is one in one of the courtyards here at the lovely Four Seasons. This is, indeed, a lovely hotel, heavenly flower arrangements that soar up to about 12 feet in the main lobby, orchids everywhere, and a Thai team that moves as if they were all taking part in The King and I.  Actually I feel rather like I am the ‘I’, sleeping in a suite themed for the king of silk.  While doing my morning floor exercises I think of other fabric-named suites I have slept in but can only come up with fashion, in the form of the extraordinary Brioni suite at Four Seasons Milano (I would not call Churchill, who has many suites named after him, a big name in the fabric or fashion world..). 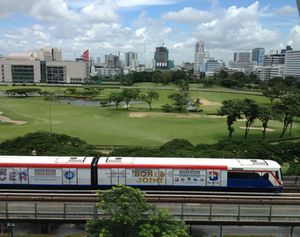 And look out from it, across the road to Royal Bangkok Sport Club

I look around my suite, knowing that one of the best-known queens of the international political world stayed here and loved it, and the whole luxury hotel, just as much as I.  I look at the books, including a Jim Thompson cookbook in Japanese, and study photographs of the great man and things he liked.  I remember the first time I came to this hotel, with John Riffenberg, who designed one of its restaurants, the Spice Market.  He knew Jim Thompson, and I knew John, so I feel distantly related to the king of silk…