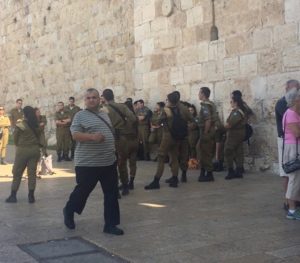 A melting pot of people, including tourists

Yes, that breakfast buffet at Waldorf Astoria Jerusalem is truly memorable – see the video below. This luxury hotel used, by the way, to have a sibling in town. Hilton on King David Street opened in 1998, directly across the street from The Palace which later became Waldorf Astoria. Then there was a little dispute and the Akirov family gained control of the 385-room hotel, which in 2001 became the Alrov-managed David Citadel. It is another striking building, by architect Moshe Safdie: its plus points also include the fact that some rooms actually face the Western Wall (Wailing Wall). Obviously the gal had to return to the Wall, which meant a circuitous trek along a wide shopping avenue constructed by the Akirovs and then a meandering walk through narrow soukh alleys.  Everywhere, there is a melting pot of people, from tourists to locals of an assortment of religions, and, not surprisingly, and really comforting, plenty of young army conscripts. 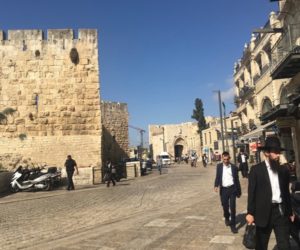 Near the Tower of David…

I arrived in bright early morning sunlight, but sadly everything down at the Wall itself was in shadow (memo to self, go late in the day next time). But life all around was just fascinating, though not as action-packed as the people getting on and off a Number 1 bus from Jerusalem Central Bus Station. I boarded one going in the wrong direction, and after half an hour of being squeezed by young school kids and grandmothers with brightly-dyed hair and assorted ages of males in an assortment of black and white religious dress – including one fur hat reminiscent of my lampshades back home, though they are a metre across and the hat was just a little less – after all this, and not sure where I was I admitted defeat, got off and picked up a taxi. 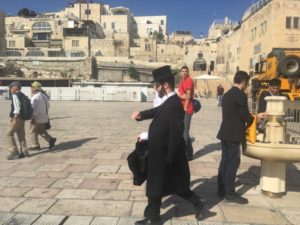 .. and near the Wall

There is no Uber in Israel, it seems. Taxi drivers have closed ranks, and run it out of town. Airbnb, by contrast, is doing very nicely indeed – some say there are ten Airbnb units for every seven hotel rooms in Tel Aviv. But I am still here in Jerusalem, fascinated by the characters everywhere. I watch a local man in his black and white gear, and considerably smaller hat (felt not fur, this time), running and pushing his folding bike down the steps in one soukh alleyway. As soon as he reached a comparatively flat area he got on the bike and careered away as if in the Tour de France. Babies here have an eventful upbringing as they too are jostled up and down all these steps, and over cobblestones. 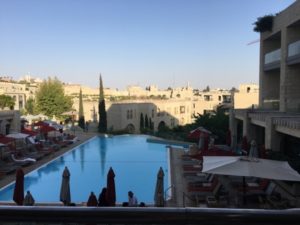 After clambering through these older parts, I returned along what I now call Akirov Avenue, the wide new pedestrian- only thoroughfare flanked by such brands as Adidas, L’Occitane, Montblanc and Zara. At the end, on the right, there are signs up to Happy Fish, the indoor-outdoor dairy restaurant of Mamilla Hotel, which is also Akirov-owned and managed: this one is Leading, and is decidedly more edgy-design than David Citadel, though both are Safdie outside, and Piero Lissoni within. Whichever hotel you stay in, you can sign at either’s facilities – I would definitely watch the sunset from the outdoor pool at David Citadel, and then dine, perhaps off the iron-rich salad with pomegranate vinaigrette, at Happy Fish. TALKING OF FOOD, SEE THE BREAKFAST VIDEO BELOW