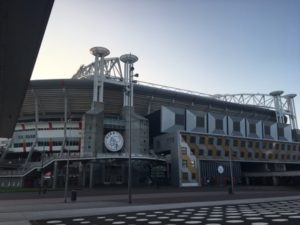 The third new Amsterdam hotel, Jaz in the City, is a bit of an anomaly. First, it spells ‘jazz’ in a weird way. Secondly it is not actually in the city centre. Next, there are some in that centre who still have not heard of it – and it is now 15 months old – but it does extremely well, thank you. This is a 21st-century luxury hotel that is absolutely right for its market sector, which is corporate plus events plus fresh air, all paired, says the gal, with extraordinarily nice and willing staff, led by the Jaz Band Leader, Marjolein Bruschke. So, where is it? Think the Zuidoost suburb, 200 yards from Bijlmer ArenaA and Strandvliet stations, both of which have masses of 15-minute trains to Amsterdam Central Station. It is part of an open-square development, the other sides being formed by an office block for national headquarters (behind is a massive Deutsche Bank tower), and the Johan Cruijff Ajax Arena and the Ziggo Dome theatre. 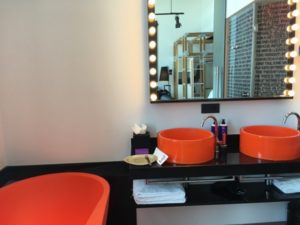 Now the Arena, which hosts some mega-events as well as sports events, seats up to 68,000 and whenever there is an Ajax home game the activity spills into that open square and into the hotel and dozens of relief staff come in to serve after-game beer. The Dome has a 17,000 capacity and has continual big-name tickets: coming up in September, for instance, are Neil Diamond on Monday 4th and, on Friday 22nd, John Legend (he who was to have been the main star on the never-happend round-the-world Four Seasons private jet tour broadcast widely in 2015). All this happening means lots of business for the 11-floor hotel. It has 258 rooms and miraculously runs with only 50 full-time staff, with others brought in as required. Marjolein Bruschke calls her Housekeeper the Dream Maker, and the black T-shirted youngsters who man the circular metal desk in the lobby are Smart Operators. 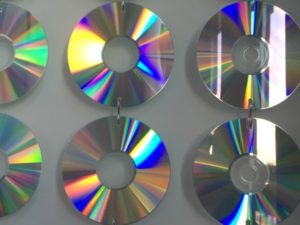 When the hotel opened it motivationally recruited by inviting applicants to jam with bits of kitchen equipment – as its name implies, this is a hotel integrally linked with music. Blown-glass threads running along upper corridor ceilings are like musical waves; bedrooms have big wall decorations of unmarked CDs hanging one above the other and moving gently to give kaleidoscopes of colour, and you may have a real guitar.   But, and this is new luxury; in traditional terms these rooms are minimalist, with open climbing frames for extra hanging and storage, and plain wood floors and concrete ceilings deliberately exposing utility pipes (view the video, below, to see a superb top-floor terrace room, and note the stunning dayglo orange basins and bath). I want to meet designer Michaela Reichwald, obviously a nonstop creator.

Another imaginative lady is the events producer, who makes sure there is, every 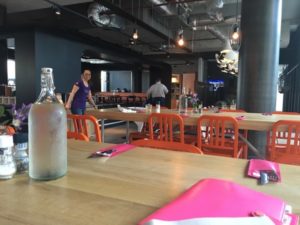 night, a different live act in the main eatertainment venue, Rhythms Bar + Kitchen (above is Oliver Twist, the resident DJ the night I was there – a few days later, the regular Sunday breakfast vibe was to be the Eduardo Blanco Jazz Trio). This anonymous lady also brainstormed with the Jaz Band Leader (the GM) and came up with the idea of quickie makeups, offered to the red-carpet-dressed females coming to events in the arena or theatre. And this, in turn, led to regular Sunday popup fashion boutiques in the hotel lobby. See why this modern-luxury hotel works? I have not even mentioned breakfast, which again is clever. It is a large second floor space with openair terraces. Help yourself, including using a tablet to get your required drink from one tap, but also follow a witty sign (‘Break a l-egg’) to have cooked-to-order. Tables, of different heights, are on wheels, so the space can quickly be reconfigured for meetings or weddings – or just to accommodate a mere few of John Legend’s fans. NOW SEE THE VIDEO OF ROOM 1119