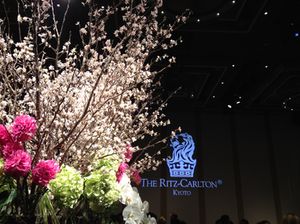 Cherry blossom in the ballroom

Cherry blossom highlighted a stylish party in the ballroom of Japan’s newest luxury hotel, Ritz-Carlton Kyoto, which only opened six weeks ago.  Already, however, four weddings have been held in the hotel’s elegant ballroom, and the gal heard how there is big opportunity for people oversees to come to be married here, and for others to come and renew their vows.  Kyoto holds special attractions for culture and history addicts from all over the world.  It was capital of Japan until 1869, and locals say that the present Emperor is just ‘on a business trip’ to Tokyo. 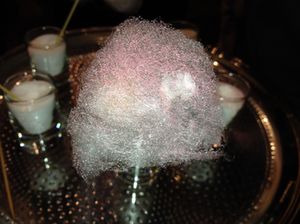 The occasion at this particular hotel was one of the two evening parties for ILTM Japan, International Luxury Travel Market’s annual gathering bringing the cream of the world’s top travel agents together to meet their Japanese counterparts, for all to learn what is new in Japan, and in the rest of the world. Shige Murayama, the hotel’s Executive Chef, who moved here from Mandarin Oriental Tokyo, not surprisingly laid on a magnificent spread.  As party-goers networked over Louis Roederer and listened to a gorgeous trio of black-dressed string musicians, they nibbled on Murayama-san’s signature Hungarian foie gras lollipops wrapped in non-sweet candy floss. There was, of course, a full-scale buffet as well. 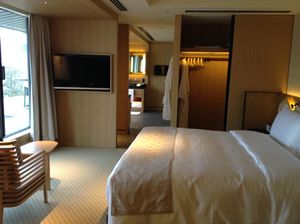 Looking along through to the suite’s bathroom…

Afterwards I retreated to my gorgeous room, one of the 134-room hotel’s top floor River Suites. Designed, like most of the hotel, by Peter Remedios, the suite stretched from living and office area through the bedroom to the bathroom area, with a glass-enclosed wet area for two shower heads and a deep bathtub (love the inner walls here, all-white with raised flower-head patterns, rather like the spa of Mandarin Oriental Paris). The suite is a harmony of pale maple wood and light. Add both a Nespresso coffee and tea machine, and hardback books that include a fascinating Japanese Farm Food, by the American wife of a Japanese farmer, Nancy Singleton Hachisu. 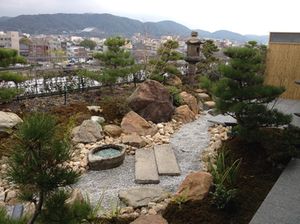 .. with this amazing terrace garden (and an ancient turret) to the left

The highlight of all the River Suites is that they have private Japanese gardens, about 12 feet wide running the whole length of the suite.  I look out, over Kamogawa (‘duck river’) to distant Mount Nyakoji. The garden has a stone turret retrieved from the 1907 home of Baron Denzaburo Fujita, an Osaka merchant who bought the land from a local merchant who was given it as thanks for building the nearby canal. This is the Fujita who then went on to found the Fujita dynasty. I can sit out in my garden, perhaps eating some of the brightly-coloured macaroons bought from the lobby’s Pierre Hermé boutiques.  I can watch life below and muse about how much the Baron gave to the modern world. 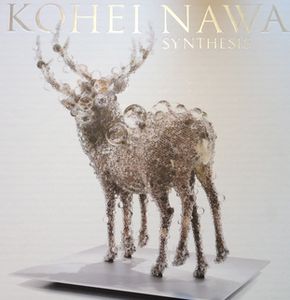 But you are, in a way, cocooned from the modern world here – an automatic door between the main entrance and the soothing lobby floor is the separation. Go through it, on arrival, and you walk down a sloping stone catwalk, with running stream to your left, and a significant wall of stone boulders from the Fujita home, on your right. Inside, the lobby is a massive C-shaped, single-height sculpture of grey stone, its area broken up by ceiling-high dividers of outsize ‘matchsticks’. Resulting spaces may have a gas-fuelled fire, and comfy seating, or sculptures, including a crystal-covered guitar-sized diwa by local artist Kohei Nawa (determined to visit him next time in Kyoto, perhaps on one of the hotel’s bikes). There is a book on him in the art library here. 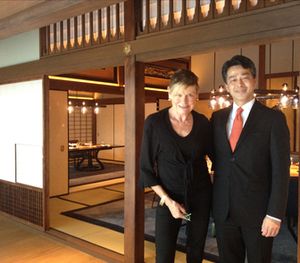 Yuji Tanaka at what was Baron Fujita’s house, now a private dining area

A 32-step grey stone floating staircase, in the middle of this luxury hotel’s lobby, is another catwalk, down to restaurants – another floating staircase leads to the lowest floor, with the ballroom and, the other end, a 24-hour Technogym, a swimming pool and the ESPA.  At restaurant level, you have Japanese, and the signature Italian restaurant, designed by SPIN, with a glass-walled cheese and ham room, and a Pierre Hermé dessert room – he also produces light-as-air breakfast croissants. Here, another design triumph to complement the very-modern circular wine wall, and wood-lined semi-circular banquettes, here you have private dining rooms cleverly reconstructed from the Baron’s old house. Later, says hotel boss Yuji Tanaka, once a teenage film buff who started paying his way to learn production by working in a hotel, later it became a steakhouse.  Now it is the sleekest of Italian restaurants you could possibly find, anywhere.