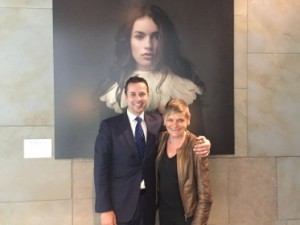 There are General Managers – and General Managers – and, in her entire encyclopaedia of knowledge of this admirable breed, the gal admits that Roy Tomassen, who runs The Conservatorium Hotel, Amsterdam, is unique. Who else commutes on a pale blue Vespa, wearing a matching helmet? Who else draws, sometimes in colour, charming old-Amsterdam vignettes on welcome cards for VIP guests? It is sure that the entertainment crowd, including Justin Bieber, Lady Gaga, Madonna, Katie Perry, Robbie Williams and others who call this their Amsterdam home, love such personalised welcomes. You know you are in a fascinating luxury hotel as soon as you arrive: you come in past a faux Rembrandt, in fact a 2014 photo-art by Marie Cécile Thjs called Girl with Feather Collar. 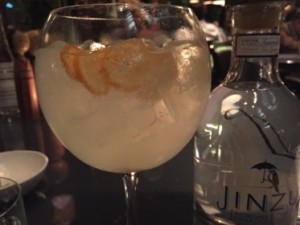 The 129-room hotel is a magnificent glassed-in conversion of L-shaped 1901 buildings. It is full of modern Dutch art, and it has a larger-than-life Dutch chef, Schilo van Coevorden, who, not surprisingly, is invariably called just by his first name. Schilo’s signature restaurant is the Japanese-inspired Taiko, drum, and we had to start dinner with a very-Dutch drink, gin, but in this case a Japanese gin, Jinzu. It was served in big balloon-shaped stemmed glasses, with little bits of kumquat floating on top. Schilo shared his thoughts on Japan, and how sometimes he can get ingredients comparatively locally – his wasabi, for instance, is grown in watercress pools in Dorset, England. His current 2015 ingredient-of-the-year, however, is the real-McCoy, Hida-Gyu beef from Japan’s Gifu Prefecture. 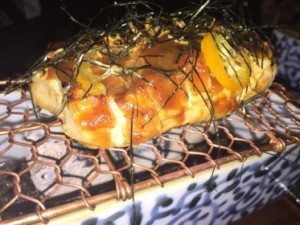 But you know what, I am almost wagyued-out for the time being, so I went for his chicken, from a named farm that also supplies his sensational butter. Chicken was listed under his grills, and it arrived on top of its own little grill, a blue and white Delft coffin holding real Japanese charcoal (yes, someone is actually importing charcoal from one side of the world to another). After this Japan-meets-Netherlands experience, I headed up to corner room 508 to experience an Italian overnight. The current architect and interior designer of the hotel is Piero Lissoni, who could have been inspired a little bit by Park Hyatt Milano, which is actually Ed Tuttle. Both interiors feature lots of stone, especially pitted Travertine, though here the stones’ holes are deliberately left empty. 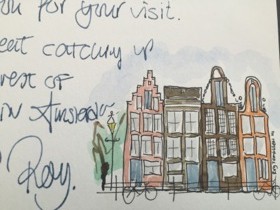 My room was actually an enormous cube dressed in champagne and pale milk-coffee colours, with lots of coloured glass – blue for the desk top, burgundy for bedside tables, milk-coffee for closet doors. It was a delightful contrast to the stained glass and tiles of the 1901-original corridor outside. There are so many unique touch points about this luxury hotel. Add real trees that grow up from the significant basement gym, popping up to the airy and popular lobby above. Add displays of old-fashioned counter bells here, and assorted white china there. The six shops, right behind front desk, include Europe’s largest walk-in humidor, with a cigar lounge. And do not forget that if someone is really good he, or she might just get a personalised farewell card that makes the recipient feel like a million dollars