Is this a ship? No, it is the bathroom of room 2117, Hilton Fukuoka Sea Hawk

The gal’s previous night-in-a-bed was in the rolltop sculpture that is Kameha Grand – Life Is Grand – outside Bonn.  Then came a night in another, but airborne, bed. The flying carpet that is British Airways whisked its contents all the way to Japan, to Narita.

That connected to another flight, south to the capital of Kyushi Island, Fukuoka, also confusingly known as Hakata.  In all this was a grand total of 35 hours’ travelling, consisting in order of car, plane, plane, bus, plane, car. Now where I am I, a boat or a hotel?

The Hilton Fukuoka Sea Hawk is, in fact, tugboat-shaped.  Every floor has one room right at its point, with a circular jacuzzi tub seeming to suspended over Fukuoka Bay beyond.

How futuristic of Cesar Pelli to come up with this 35-floor building, finished way back in 1995 but looking truly 21st century. It is on land reclaimed about 50 years ago. 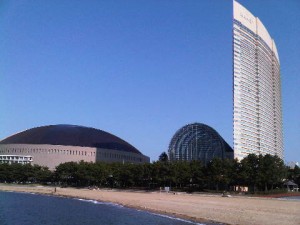 Architect Cesar Pelli's 'knife-point' Hilton in Fukoaka - to its immediate left is its atrium, with the Yahoo! Hawks dome to ITS left

That is what the 86-year old Argentine-born architect epitomises.  Think of some of his other greats, like the twin Petronas Towers in Kuala Lumpur’s KLIA centre, right next to Mandarin Oriental Kuala Lumpur.

It is Cesar Pelli, too, who has designed the elegant Mandarin Oriental Tokyo (he has done quite a lot in the Japanese capital, including the American Embassy and the Tokyo American Club).  In Las Vegas he has done Aria in City Center, which also includes another stunning MOHG beauty, Mandarin Oriental Las Vegas – although that 60-floor building is by Kohn Pedersen Fox.

Hilton Fukuoka Sea Hawk has 35 floors, containing in all 1,053 rooms, 35 of which will be re-born April 28th, 2012, as Spaces, an integral boutique hotel like Hilton’s usual executive club, with lounge, but aimed at the leisure traveller.

View down from 2117, with the Yahoo! Hawks dome on the right

Room 2127, in the point of the tug-shaped building, looks far out to sea from its jacuzzi point.  To the left you see Japan’s tallest seaside tower, the 750-ft Fukuoka Tower built for the 1989 Yokatopia Asia Pacific Exhibition commemorating the centenary of the official founding of Fukuoka City.

Look right from 2127 to see the adjacent 36,000-person Yahoo! Dome, official home of the SoftBank Seahawks, Japan’s 2011 champion baseball team, owned by SoftBank.  Next month SoftBank is paying a billion dollars for the Dome, which it is currently leasing.

SoftBank was started by its baseball-loving boss, Masayoshi Son, born as a Zainichi Korean (immigrant Japanese), who was stimulated to go into business after talking with McDonald’s then-President Japan Den Fujita.

Along his business way Son bought Comdex and 16 smaller trade shows from Sheldon Adelson, which enabled that determined gentleman to pursue the Las Vegas Sands story and we know where that is going, namely in select places very fast – Adelson is currently deciding whether to add a clutch of casinos in Barcelona or Madrid to his international portfolio.

Back to Son.  He owns Vodafone Japan and 40 percent of Yahoo Japan and so much else.  His brother Taizo is married to Seia Lee, who runs a private travel club called Jetsetter whose website claims partnerships with nearly every top hotel group (Seia is understandably coy about who her Jetsetter members are but she has let slip that one is Yasumichi Morita, the Glamorous designer, whose work includes Hullett House, Hong Kong; St Regis, Osaka, and W Hong Kong). 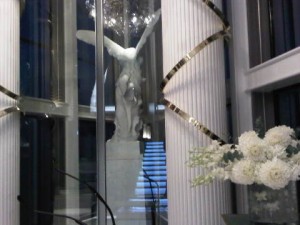 The knife-point apex of the 35th floor wedding chapel (see, reflected in blue, the glass steps own which the beautiful bride processes)

Why come to Fukuoka? Not many westerners do, although Japanese-speaking Swiss man-of-the-world Christian Baudat says it is his favourite city in the entire country.  One can see why.

To recover from the long flights, I took a run along the beach immediately outside the hotel. There were families playing and making sandcastles, and the ends of the 100-yard breakwaters hosted half a dozen amateur fishermen here, the same number there.

A boardwalk across the sand led to a purpose-built marriage chapel, Marizon wedding chapel, built a real ‘church’, standing on wood stilts some 12 feet above the water.  Sadly, only invited guests were allowed in.

Back at the hotel, of which Christian Baudat is big-boss GM, he took me up to the 35th floor to see his marriage chapel, a glass beauty in the point of the building. At the rear of the sharp triangle-shaped whole, under-lit glass stairs lead to the upper seating. Up to three or four brides process down these stairs every day – the hotel does over 1,000 weddings, in various venues, every year.  There are 45 wedding coordinators ready to help. 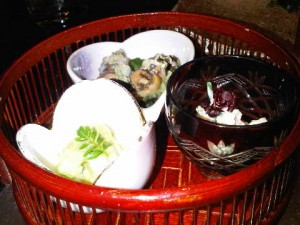 At Tomozuna, on the hotel's 35th floor, you sit up at the chef's cooking counter (with 'that view' behind). You might start with cockles, behind; bamboo, left; seasonal vegetables, all in a lacquer box

This is a massive operation – fortunately there are many places to eat, both in the hotel and around the adjacent Dome.  Christian Baudat felt like sushi-and-view, so the 35th floor Tomozuna fitted the bill.  Sit up at a wooden counter, looking straight at the jovial black-clad maestro who has been slicing fresh fish and rolling balls of sticky rice for over 30 years.

After a starting taster, a trio in a lacquer box that included bits of bamboo, cockles in their shells, and summer vegetables with runny tofu, dishes were passed over to us in quick order.  The sushi included yellowtail and mackerel wrapped around sea-urchin – and, of course, salmon.

There were hot tasters of squid (cooked by the chef right there, in a little pan on a Bunsen burner, rather like a school science class) and a variety of sushi, and a plate of absolutely enormous broad beans cooked in the pod, and an open length of grilled bamboo, and a miso soup and glasses of Alexe Corton 2009 from Burgundy.

Sashimi, prepared in front of you, includes mackerel, left, rolled around sea-urchin

I had, mind you, worked up an appetite. After the outdoor reconnaissance run, I had headed for the hotel’s Precor gym, 24 hours and I found an English-language channel (number ten, if you are planning a visit) among dozens of little-girl Hello-Kitty-type local channels.

I then made my once-only visit to the indoor pool, which is part of Sotoroko Club.  Quite why a health facility in Japan has to be themed for Africa, complete with displays of wood busts of long-necked women and a full-size alligator sculpture lounging by the big hot tub, is beyond comprehension, but still.

I was received by two business-suited senior gentlemen who look like ambassadors or top management of Shisheido, and given a tight-fitting blue swimhat.  Evidently yet more experiences are in store, here in Fukuoka..