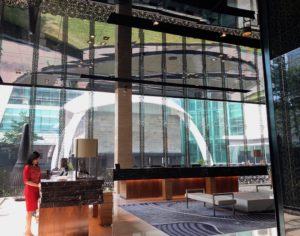 Hotel Indonesia Kempinski is a Jakarta institution, built for the fourth Asian Games and opened on August 5th,1962, by President Soekarno (as was a welcome monument in front of the hotel, with a traffic circle around it, Bunderan Hi).  The main lobby of the hotel is, says the gal, a light and glass construction, but leading off this is a maze of corridors, many lined with photos of Soekarno and dozens of the global VIPs who have graced the hotel ever since.  This is still where top people come to see, and be seen, and where big names get married: the main ballroom holds 3,500, still not enough for some weddings, which can be up to 5,000 (guests are often asked for certain hours during the event, to avoid congestion, and food is stand-up, apart from lucky VIPs, assigned to seated areas). 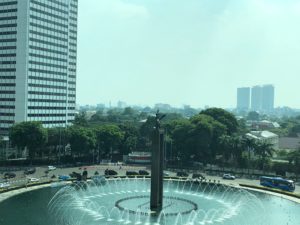 Looking down at Bundaran Hi

There are 289 rooms and  #826, a suite, must surely be a favourite as it looks down at the Bunderan Hi circle. Through 24 hours, traffic flows – interestingly, and seemingly on a whim, traffic direction can entirely, or partly change, depending on the current thinking of the policemen on duty. Quite a lot of the day-time and evening traffic is on its way to Jakarta’s largest and most important shopping mall, which sprawls around several six-floor open atriums (only last week what must be one of the world’s biggest Victoria’s Secret stores opened here).  I tried to take a walk outside the hotel but, literally, the sidewalk pavement stopped abruptly, after 300 yards, and I either had to reverse, or head into the mall, which I did (I could exit directly to the hotel). 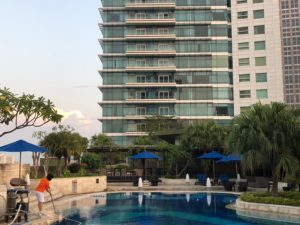 Looking over the pool to the Residences

The mall is also connected to Kempinski Residences, which share a 17th floor rooftop pool, and the adjacent gym. All this, including the mall, happens to be owned by Indonesia’s richest brothers, Budi and Michael Hartono – Michael Hartono went viral on social media a few weeks ago because, at age 78, he won Bronze (for bridge) in the current, 18th, Asian Games, and he, said to be worth double-digit US billions, came home with $750.  The hotel is also partly owned by the Katuari family: Grace Katuari has done an outstanding job in bringing some elements of the hotel up to global restaurant standards.  She has, for instance, replaced a restaurant on the ground floor of the hotel by a stunning Scandinavian-look Japanese, OKU. 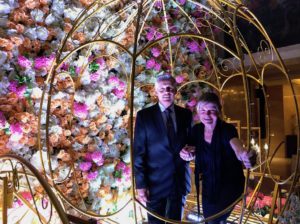 OKU is filled to capacity, all evening long, and entirely local.  I was with the hotel GM Sjefke Jansen, who must surely have made the reservation soon after he arrived from St Petersburg five months ago (foodie hotel guests should definitely book a table and room at the same time).  As local connoisseurs know, Kazumasa Yazawa’s food is exquisite, with such tastes as buta pork belly salad, and a donpeyaki omelette with spicy raw cod and emmenthal.  Apparently another restaurant here, a 650-seat Paulaner Brauhaus, also runs at 100% (who says hoteliers cannot run restaurants?). I really had to stop eating: I did not want to start turning into one of the fascinating women featured in a painting along a ground floor gallery.  We halted for a minute, on our way out, to do a selfie in front of a flower-wall set up for a high school prom ball being held in a smaller ballroom, the 800-person oval room. When I left the following morning that area had metamorphosed into photos of mountains and young blondes in dirndls, hosting an Austria marketing breakfast.  There is always something going on at this historic luxury hotel. NOW SEE MY SUITE