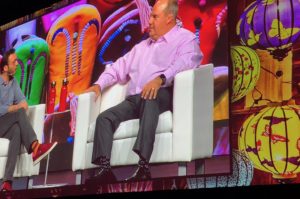 As always, the great and the good made their way to Las Vegas for the annual Virtuoso Travel Week, this year August 11-17, and as always, centered on Bellagio.  Luxury hoteliers joined a staggering record attendance of 6,071 (there were 110 from Four Seasons, alone, led by Worldwide President Christian Clerc). Although there were previous-day events, the main programme started on the Sunday afternoon, when all attendees somehow managed to get in, without squeezing, to the hotel’s Grand Ballroom for the do-not-miss Forum.  Why was it so splendid this year? Virtuoso Chairman/CEO talked with great insights to a long-time friend, the charismatic England-born Simon Sinek, author of Find Your Why.  This was followed by a really moving tribute to Matthew Upchurch’s father, the much-admired Jesse Upchurch, 1925-2018, who had founded the predecessor to Virtuoso. In honour of Jesse Upchurch, who like his son seemed to feel most at home in Africa, Virtuoso had flown in a 30-strong pre-teen children’s choir from Kampala.  See the video below. 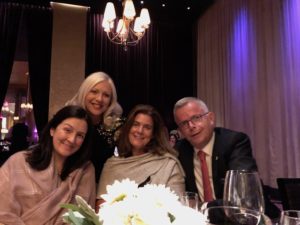 Supplementing the days of official events there were over 700 parties. On the Saturday, Kempinski’s newly-elevated COO Amanda Elder threw a Michelin-starred dinner featuring the chef from the company’s Vienna hotel – she was supported by several Kempinski leaders, including head Americas Xavier Destribats, and Budapest-based Stephan Interthal. On the Sunday night, following the main reception, Swiss Tourism took Virtuoso’s 80 invited media on a circuitous bus-tour of Las Vegas Boulevard before we arrived at the Neon Museum. Just as its name implies, a collector’s scavenging of no-longer-needed electric signs from The Strip from years past has been deposited in the desert and, thanks to plenty of power and presumably several new tube lights, here are historic signs in full glory. 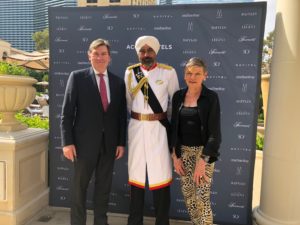 Accor’s CEO Luxury Chris Cahill had one of the most gruelling party-host schedules – another busy Accor guy was one of the doormen of Raffles Singapore who towered over others at every event he went to and posed seemingly endlessly for photos, as he does back home in the City-State.  Chris Cahill hosted Sunday’s annual breakfast for travel agents, 8 a.m. poolside at Bellagio. Monday morning he was there to greet a more varied selection of guests, inside at 6.15 a.m. to relate his thoughts of Accor’s future, and that company’s assessment of luxury travel today, which in effect closely resembled data then shared by Nathan Lump, Editor-in-Chief of Travel+Leisure. 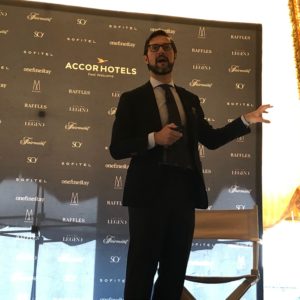 Travel+Leisure‘s figures apply mainly to USA.  Looking at the magazine’s 6.3 million readers, median age is 49 and they take an average seven trips a year. Interestingly, 97% say they plan to take at least one domestic trip in the year ahead, but they want to travel the world.  Nathan Lump sees the health and wellness sector growing at six percent, and there is big uptake too in group travel, families and multi-generational, and groups of friends. Luxury hoteliers should consider that experience collecting is one of the macro trends he sees. Remember what guests see, hear, feel and generally sense while they are away from home. Value for money is, by the way, evolving to more of a value-for-time measure. NOW SEE A VIDEO OF THE KAMPALA-BASED AFRICAN CHILDREN’S CHOIR