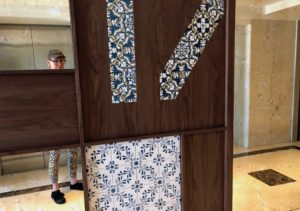 A welcome that is well-thought out and personalised creates the kind of memory that brings luxury travellers back again and again – as the gal heard at Virtuoso Travel Week in Las Vegas two weeks ago, transformational points create loyalty.  Take the arrival at InterContinental Lisbon.  It was 11.45 p.m. – yes, the video below shows only a nocturnal view, sorry, but flights do not always take off, and/or land, at what some would deem civilized hours. The elevator stopped at the 17th floor, and you know that from a massive 17 on the wall. There, in room 1710, awaited a unique Lisbon treat, three really warm custard tarts. 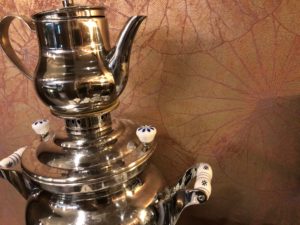 And not just any tarts but Pastéis de Belém, as made since 1837, fashioned by hand to a recipe from the Monsteiro dos Jerónimos devised by de-frocked monks after monasteries were closed during Portugal’s Liberal Revolution in 1820. This is a 331-room hotel that, thanks to Eric Viale, IHG’s Area Manager – and soon to be head of France – continually reminds you of Portugal, past and present. The samovar in the Club Continental lounge, a clever conversion of the rear of the main lobby, has Portuguese tiles as buttons (and there are the hotel kitchen’s excellent version of custard tarts on the breakfast buffet). 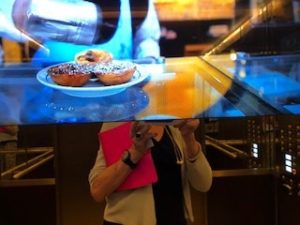 This is one of two hotels that literally, from the high spot above Parque Eduardo VII, dominate this beautiful city – and beautiful it is, litter-free and full of lovely, helpful people.  In 2017 the number of tourists surged 12% to 12.8 million and this year a further rise of 12% is expected (hotels are full and there are not enough of them).  The InterCon opened in 1985 as Le Méridien Lisboa: in 2003, as part of the Tiara group, it was renamed Park Atlantica Lisboa and in 2014 the owners sensibly decided that InterContinental was a better brand.  It is a very well thought-out hotel, with an excellent 24/7 LifeFitness gym, with lots of fresh fruit – always a sign that the GM cares about wellness. 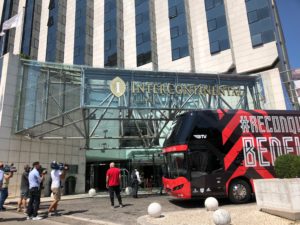 As I left what is really an unforgettable and admirable hotel I marvelled at the futuristic video in the elevator. I went out, into the blazing sunshine, to be greeted by a posse of television cameras, and then up rolled a mammoth Benfica TV bus.  Lisbon’s Benfica football team (‘The reds’), a publicly quoted company, has, with 14 million supporters worldwide, the honour of having the highest percentage of supporters in its own country.  It can certainly pay for such a bus. Last September it reported profits of €44.5 million, enough also to support its own television network, BenficaTV, and a weekly newspaper. From custard tarts to a football bus, I smile at lovely Lisbon today. NOW SEE A VIDEO OF ROOM 1710