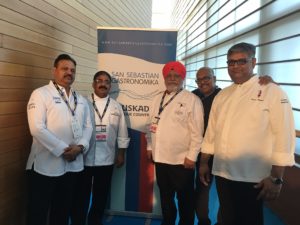 This year’s Gastronomika was held in San Sebastian, October 8-11, 2017. India was the chosen honoured country, and Manjit Gill headed a team of powerful culinarians who showed Spain just how superb ITC’s cuisine is.  Restaurants reatured included Dakshin, Dum Pukht, Royal Vega and that all-time favourite, Bukhara.  Operating non-stop in ITC Maura, New Delhi, the 130-seat Bukhara continues to be a favourite with international royalty, politicians and celebrities.  After 8pm, the restaurant is first-come first-served and everybody sits on low stools, and has fabric neck bibs tied on, ready to do justice to memorable dishes cooked, in North-West frontier style, in clay tandoors.  Head Bukhara chef J.P. Singh and his team produce about 450 covers a day, and an average of 40% of guests are actually staying in ITC Maura, named for Chandragupta Maurya’s empire, which ran from 322-185 BC.  Throughout, ITC’s cuisine is steeped in history, and essentially authentic as well as tasty.