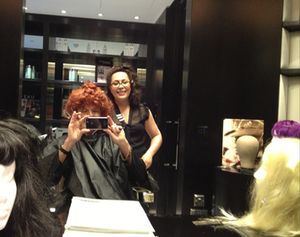 Above and Beyond, the ultimate one-person-audience that is known as immersive theatre, is a total masterstroke, and it has been taking place in one of the most sensational luxury hotels in Europe, Corinthia London.  The experience is unique, and the gal was lucky enough to take part before it closed, April 21st, 2013, after a run that was so successful that not only was there a full house every night, it was extended by a week.  Basically, one audience member at a time takes part, being led through the play, in and out and back-stage of the hotel.  Another audience member starts the same circuit seven minutes later … 24 people in all, each night. 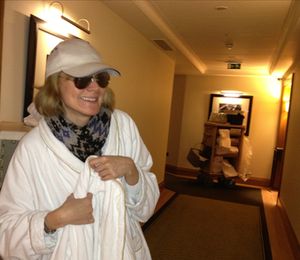 There are lots of quick, successive, scenarios, which play into each other.  Several of them involve a Greta Garbo-type celeb Ingeborg Olensen, played by Anna Andresen.  You, the audience, are surprised by her when she leaps out of a housekeeping trolley on a hotel floor – yes, the show takes place in the hotel (you have already been put into a waiter’s jacket for your first day at work, and you have learned to set tables, and, in the bar, shielded a man canoodling with his mistress when his wife comes in). 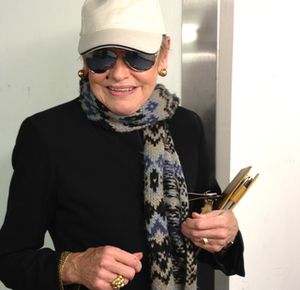 Ingeborg is paranoid about paparazzi and you have to dress as her, in disguise, so you can divert attention.  As you leave the hotel, via the delivery dock, paparazzi do indeed snap you, and a man bearing a Daily Mail business card offers you a hundred grand for exclusivity (I immediately said double that). Driven around the block fast, I answered questions: I love a glass of champagne, and my biggest obstacle is shortage of time.  At this point I am without the red wig that was donned in one of the earlier vignettes of this non-stop, laugh and learn a minute, performance. 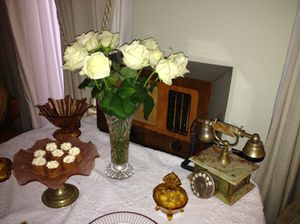 There are 19 actors playing not only Ingeborg Olensen and reporters and paparazzi but also ‘staff’ members, and very plausibly.  In a spa engine room disguised as a military War Room (the hotel was Ministry of Defence during World War II) I am asked how to get a message to a recipient of a food parcel that his wife has had a baby. Lion has cub, I suggest. It is written on a handkerchief, put into a tin of spam. One – usually normal – hotel bedroom is taken back 100 years.  A new bride wants me to do up her dress, pour her tea while she awaits her husband. 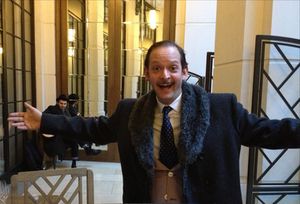 .. as does the ‘General Manager’

Back in the bar, a 2013 guy has upset water over a genealogy chart.  As a new waiter I help mop it up.  He shows me his late mother’s handkerchief. Lion has cub is written on it.  I am led to the hotel’s central outdoor courtyard where the ‘General Manager’, in a fur-collared long coat, shows me a big scarf and whisks a glass of champagne from under it. He has me cut a pack of cards, to reveal one on which the word Champagne is written.  He hands me an envelope with my name written on it.  I open it to find the words ‘shortage of time’. We turn round to see a red balloon wafting down from the hotel’s roof.  Attached to it is a hotel employee ID card, properly laminated.  My name is on it, as is the photo of me in the red wig, taken surreptitiously. 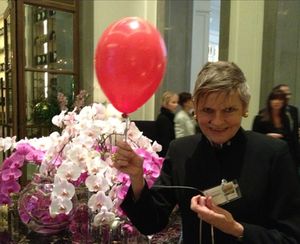 The whole thing is such fun that it is no wonder absolutely everyone wants to take part: many groups of friends come, go round one by one and share their experiences afterwards.  For those who have never seen the ‘backside’ of a hotel before, heading along corridors with utility pipes overhead and being taken to uniform supply for your servers’ jacket, is a real eye-opener.  And for actual guests, what a lark!  The brilliant team behind this show, Arts Co, won the hotel’s theatre arts competition, and the result is so spectacular that I am told the luxury hotel will run immersive theatre again.  Sign up now ….it is brilliant.