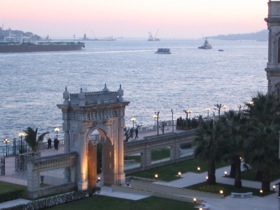 This has been a memorable sight in Istanbul for decades. The luxury Ciragan Palace Kempinski hotel occupies part of the land that was the Kazancioglu pleasure garden in the 17th century but at the end of the great Tulip Era, in about 1730, the garden was abandoned. Over a century later Sultan Abdulaziz had a palace built, and many episodes later – including briefly being a new parliament building before it was razed – it was bought by the Japanese company Kumagai Gumi in 1986. With a splendid new E-shaped building attached to the rebuilt shell, it opened in 1990 as the 322-room Ciragan Palace Kempinski. Now, after all this time, the Abu Dhabi Investment Authority, which owns the hotel, is going to spend, enormously, on bringing it up to tomorrow, says the gal. Designer is the studio of the late Alberto Pinto, which also did The Lanesborough, London, now an Oetker hotel. 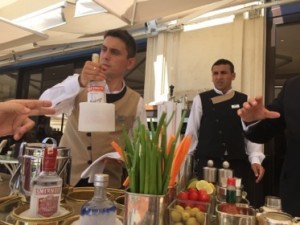 I was brunching on the hotel‘s terrace, near its famous 100-foot pool, heated year round to 31 degrees as a result of a cogeneration plant producing surplus electricity. First, many of the bunch of brunchers went for bloody Marys, traditional ones rather than the stylised versions that another hotel group does so sophisticatedly. The ingredients come to you, for blending table-side. I am reminded of my last visit to Abu Dhabi, actually, when it seemed that every luxury restaurant worth its salt was making more and more complicated gins and tonics table-side. What on earth are regulars going to do when the hotel is half shut during its deep-tissue botox? That is the question. Will everyone else benefit? 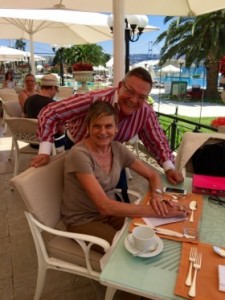 Right now there is more than enough business for everyone. Without exception hotels in Istanbul are doing well. There are more Russians coming here if they are blacklisted by the EU, or if they want to buy goods without the annoyance of EU sanctions. There are enormous families of Middle Easterners, put off Syria for obvious reasons, and Beirut, at least temporarily, because of the indescribable odours there must be in that city as a result of the weeks’ long garbage strike – as I write the temperature there is 31° C.  And there are a surprising number of Latin Americans, who have fallen in love with Turkish soaps – when One Thousand and One Nights is showing in Chile, streets are virtually empty, says Chile‘s Ankara-based Ambassador. Halit Ergenç, star of The Magnificent Century, is ‘heartthrob of the moment’, says one Chilean reporter, and a colleague flew to Istanbul to interview his neighbours. 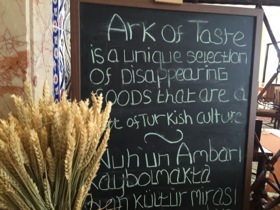 Ralph Radtke, long a top global hotelier, is already planning how he will celebrate when his hotel has finished its renovation. There will be a great party for all previous GMs, for instance – one is sadly now running a hostelry the other side of the pearly gates. Expect Ciragan Palace Kempinski’s new-look food product to build even more substantially on the local-organic-healthy offerings that are already visible, both at daily breakfasts and here at lunch, sorry, brunch. And of course there will be a brand-new spa.