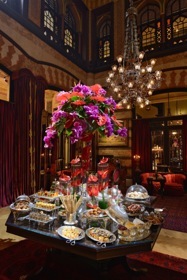 The luxury Jumeirah hotel group cleverly tags itself Stay Different, and there can hardly be two further extremes than its two hotels in Turkey. First the gal luxuriated in the pomp and circumstance of the truly amazing Jumeirah Bodrum Palace Hotel. Now it is the turn of the historic Pera Palace Hotel Jumeirah in the Tepebaşı neighbourhood of Pera district of Istanbul. What a history it has, too, built in 1892 as a railway hotel, for the Orient-Express, and later associated with royals – Emperor Franz Joseph, King Edward VIII – and entertainers and writer galore. In 1924 Greta Garbo stayed for 50 days in room 212 while awaiting funding for a film, while 202 is named for Ernest Hemingway. Government-owned, the hotel is leased to the Demsa group, who also have St Regis Istanbul, and they have asked their good friend Anouska Hempel to tweak the décor. Public areas here are, well, simply fascinating. 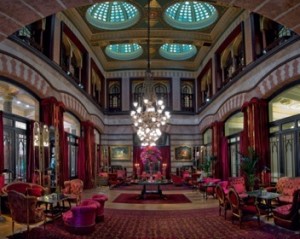 There is an original elevator, going back to the hotel’s birth. Look at the Kubbeli hall, named for the blue glass domes, nearly nine feet across, in the ceiling. Local people come here for afternoon tea, when an 89-year old pianist plays – the first afternoon teas in town were served here. On the third Saturday of every month there are morning classical concerts (book ahead for one of the 200 tickets). Every Friday night there is jazz in the Orient Bar – just turn up, and perhaps stay on for the jazz menu in Agatha Restaurant, named for the hotel’s most famous of all guests, Agatha Christie, who wrote Murder on the Orient-Express when staying here in 1934.   Her other top novel, by the way, has been renamed from Ten Little N….s to And Then There Were None (it has sold over 100 million copies in all). It is being filmed by the BBC, starting Aidan Turner. 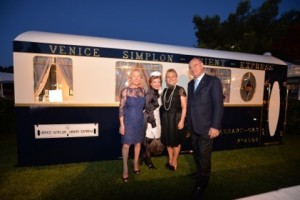 Getting ready for the Orient-Express to Venice

Ah Agatha. This is the 125th anniversary of her birth, and it is being celebrated in great style. Pinar Timer, the creative GM of the hotel, was chatting with people from Orient-Express, the train, and with people from Belmond Cipriani in Venice. This resulted in a once-off train journey, Istanbul to Venice, culminating in poolside dinner at the Cipriani on her actual birthday, July 1st – the meal was prepared by the host hotel‘s David Bisetto, the train‘s chef Christian Bodiquel, and Pera Palace’s Arif Kemal Dogan. It was so successful, says Pinar Timer, that now Arif Kemal Dogan will be cooking at SBM‘s Hotel Hermitage in Monte-Carlo, to commemorate Turkey’s Republic Day, on October 29th, 2015 (there will also be a dinner, and concert, the following night). 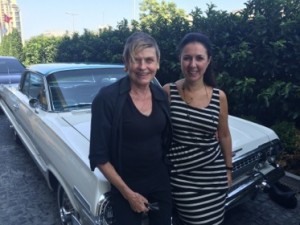 A few days before, Pinar Timer will be working on something else, here at Pera Palace. Istanbul’s first Black Week crime writers’ gathering will be held at this luxury hotel, October 22-24, 2015: pundits will include local mystery writer Ahmet Umit, and Alexander McCall Smith and a host of other international writers, plus Agatha Christie’s grandson Matthew Prichard. There will also be a mystery who-dunnit competition in local bookstores. Question for Pinar Timer: how do you manage to organise all this plus run your 145-room hotel, lead your 146-strong team and look after a husband and three children?