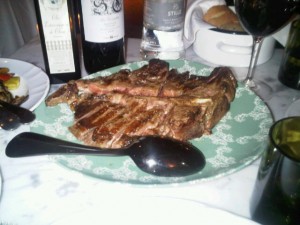 Every healthy girl needs a hunk of beef from time to time, and the shared Bistecca alla Fiorentina in the Cantina at Castel Monastero really fitted that requirement.  Yes, it has to be for two.  Only a sumo wrestler or a gourmand trying to get into the Guinness Book of World Records could manage one alone.

OK, first Castel Monastero, truly one of the world’s most natural luxury resorts.  It is an entire hill-top village in Tuscany, 25 minutes’ drive from Siena, 90 minutes from Florence.

You turn off a country, but busy, road, past a typically-Italian smallholder’s house that probably has not changed in centuries.  Yes, waves a wizened sage in an old beret, castle up there.  Up a steep, twisting 400 yards and, surrounded by rolling vineyards, bright green at this time of year, there is the complex of buildings, once castle, once monastery (some go back many centuries, others look as if they do).

What appears to be a village of soft-terracotta houses with the shallow, tiled roofs that are as Italian as spaghetti and gesticulating while telephoning is in fact the trophy that Emma, Lorenzo and Andrea built.  Emma Marcegaglia, President of Italy’s employers’ union, Confindustria, and CEO Gruppo Marcegaglia, owns this-all, with Lorenzo Giannuzzi, CEO of Eleganzia Hotels & Spas, who oversees its operation. Andrea Prevosti, onsite GM, runs it, and is mine host of this Preferred hotel.

After a long drive watching BMWs and Maseratis appear like dots in the rear distance but, almost immediately, flash past our baby Lancia, we were pretty shattered but we soon picked up.  Thanks to the hotel’s bikes we pedalled up, up, along ultra-dusty tracks flanked by vineyards. Sun streamed down, even at this late hour. We plunged into one of the three full-size and deep pools, showered and changed, and it was time for food, carnivore pleasure. 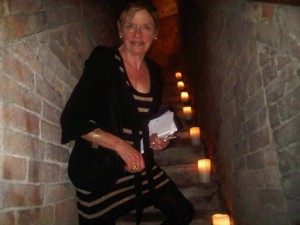 Down 32 candlelit mediaeval steps to the cathedral-sized La Cantina

Gordon Ramsay’s signature restaurant would have to wait.  Tonight Bistecca alla Fiorentina called.  La Cantina is down 32 old stone steps, flanked by on-step candles. You emerge to a giant brick barrel-vaulted cathedral – shaped rather like an open ‘L’ that was once used to store whole harvests of wine, today would hold 500 people standing, with ease.

The L’s leg is sensibly filled with long oak tables all set, with lit candles, as theatrical backdrop. The L’s foot is filled with mostly-couples at occupied tables, also candle-lit. Ours is decorated with full bottles of the Castel’s own San Cristofero Sangiovese Toscana 2008, which of course we choose, and Donatella Cinelli olive oil, divine with tomato-studded focaccia (presented, imaginatively, in a linen-lined white enamel cooking pot). 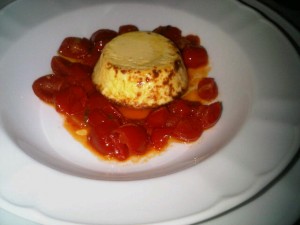 We preamble, with a hot parmesan ‘flan’ that is an irresistible mousse, surrounded by cooked tomatoes, and truffle-studded spaghetti.  And then the highlight appears, the T-bone cut from the forward end of a strip loin, the bone holding strip one side, tenderloin the other.

It comes with minicube-shaped roast potatoes and grilled Mediterranean vegetables.  It gives a heavenly aroma. With an added drizzle of Donatella and a couple of glasses from San Cristofero – oh boy! Thus filled with a mountain of goodness, a healthy girl retires to her hilltop abode, and sleeps like a log.